Over the past week, Israeli media has been closely tracking the arrival of millions of locusts swarming the country from Egypt.

One weekend in late 2004, I was snorkeling in the Red Sea just a short walk from the Egyptian border crossing, marveling at a small octopus, when I emerged from the water to see an enormous cloud of locusts crossing the border and charging due north.I’ve also been closely tracking this pre-Passover plague — because I was an eyewitness to Israel’s last locust swarm.

I savored that moment of Biblical irony as the plague of locusts left Egypt and made a mass exodus to the Land of Israel. I asked a local Israeli on the beach what she thought.

“Thailandim eat those things,” she said, referring to the large number of Thai workers working agricultural jobs in Israel. “Yuck!”

The head of a southern Israeli municipal council, Shmulik Reifman, has offered his own recipe for locust shish kebobs drenched in coconut milk, a dish he invented while touring the recent locust storm.Yum, say Israeli foodies, who are turning the pests into a délicatesse. Chef Moshe Basson of the Euclalyptus restaurant in Jerusalem, who specializes in foods of the Bible, prefers his locusts fried and smothered in risotto seasoned with coriander and chili. “First throw your live locusts into boiling vegetable stock. They will squeal like lobsters as the air shoots out of their shells,” goes his recipe, posted by The Guardian.

Rabbis are mixed on the question of the insects’ kosher status, but Reifman gives it a thumbs-up. “Jews in Morocco and Libya used to eat locust a lot, and it’s rich in protein,” he told the Israeli daily Yediot Ahronot, which printed this recipe. “You can prepare it in two ways: frying, or with vegetables and coconut milk. It’s a winning recipe, and you don’t mess with a winning recipe.”

1. Wash the locusts and skewer them on wooden skewers.
2. Roast them on the grill for 3 minutes each side. Alternatively, fry them in a lightly-greased skillet, and only then skewer them.
3. Heat the olive oil in a small pot. Add the onions, garlic and ginger, and fry for 3-4 minutes. Add salt and pepper.
4. Add the coconut milk and bring to a boil. Remove from stove.
5. Arrange the shish kebobs on a plate, dribble the sauce over them and garnish with a little diced onion. Serve with white rice. 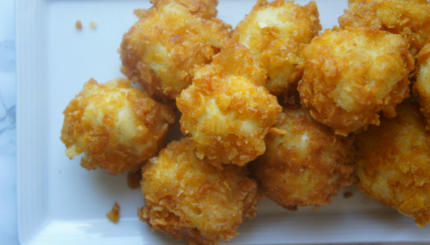 How to Make Fried Kugel

If a fried macaroni and cheese ball met a zeppoli and then converted to Judaism, their baby would be one of these fried kugel balls. 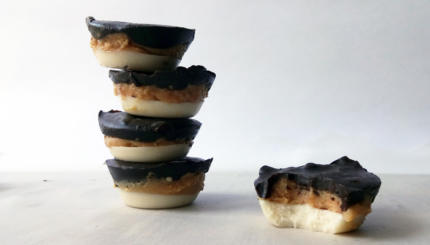 Take peanut butter cups to the next level with coconut butter, almond butter and dark chocolate.