The Japanese word Okonomiyaki is derived from two words: okonomi “how you like it” and yaki “grill.” Okonomiyaki is a customizable Japanese savory vegetable pancake. Like a latke, it gets cooked in oil in a fritter formation. Unlike a latke, it’s usually made into a large plate-sized pancake comprising mainly cabbage. Food historians have linked the rise in popularity of okonomiyaki in Japan to World War II, when rice was more scarce and this recipe offered a filling meal or snack with a wheat-based starch. Throughout Japan there are regional differences and countless variations of okonomiyaki, but the most common form of the dish involves a batter made of flour, a variety of mountain yam, eggs, shredded cabbage, green onion, dashi and often the addition of pork belly. It gets topped with its own tangy sweet sauce, Japanese mayonnaise, and bonito flakes (katsuobushi). 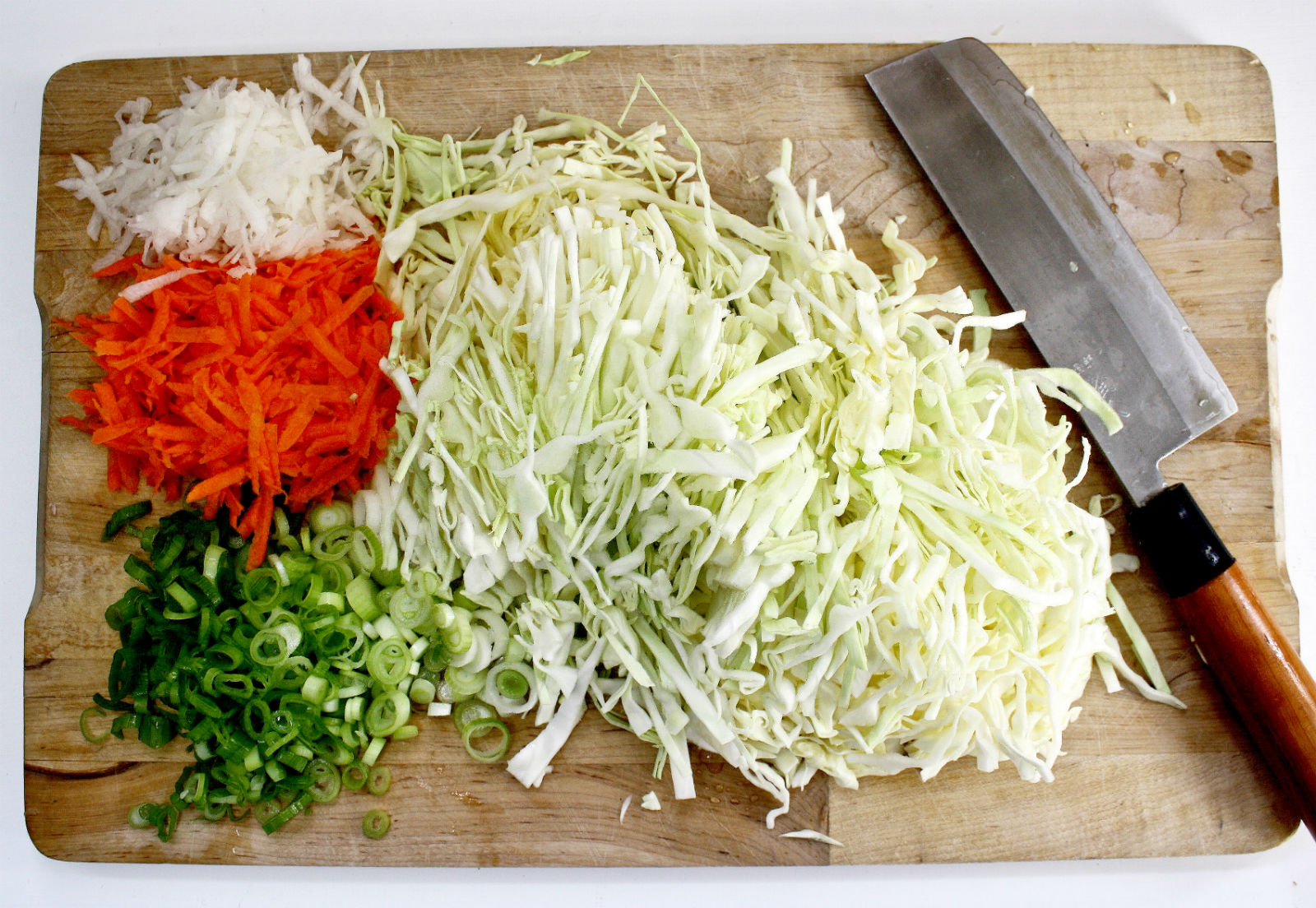 I first fell in love with okonomiyaki on a trip to Japan. You can find it there in restaurants that specialize in the dish, but it’s also something that is prepared in home kitchens. The cabbage gets slightly crisp, tender and sweet when seared in oil on a flattop or skillet, and then it gets generously slathered with an umami-rich sauce, along with a welcome drizzle of creamy mayo. The richness, sweetness and tanginess of these components all work perfectly together. A few months after I got back from Japan, I ended up eating at Brooklyn’s Japanese Jewish restaurant, Shalom Japan. I didn’t hesitate to order their Jewish-influenced spin on okonomiyaki. They’re known to top it with pastrami, or even corned lamb tongue and sauerkraut. It became clear there that okonomiyaki, with its base of humble cabbage and onion, is a perfect fit on a Jewish table. The fried pancake part of it all called out “Hanukkah.”

I am a fan of all pancakes and fritters, and I set out to modify the classic Japanese version for a recipe that didn’t require access to a specialty food store, and that could be made with kosher ingredients. Full disclosure: My version lacks authenticity. If you’re going for the real deal you’ll need a batter made with an okonomiyaki flour mix, or nagaimo yam; this special kind of yam is added in powdered form to the flour mix, or gets grated fresh into the batter. The toppings should include bonito flakes, and the batter should be made with dashi. These ingredients can be found at most Japanese markets. Instead of nagaimo yam, my version uses a batter of flour and potato starch, and instead of dashi I use water.

I’ve also included a recipe for homemade traditional okonomiyaki sauce that can be made simply with easy-to-find ingredients, but you can also buy a pre-made bottled sauce. You can make these pancakes large-sized and cut into wedges like the Japanese do, or slightly smaller à la a large latke. I wouldn’t go too small with this, as the vegetables tend to hold together better en masse. This recipe doesn’t need to be too exact, and it works as a blank canvas for additional vegetables like kale, mushrooms and/or daikon. In the spirit of Hanukkah, these okonomiyaki get cooked in oil, but they’re not heavily fried. The oil used to fry the okonomiyaki gives a loving nod to the miracle of the oil glowing in the Temple for eight days instead of one, but the heap of vegetables and addictive sauce make this a nutritious and satisfying addition to any Hanukkah meal. 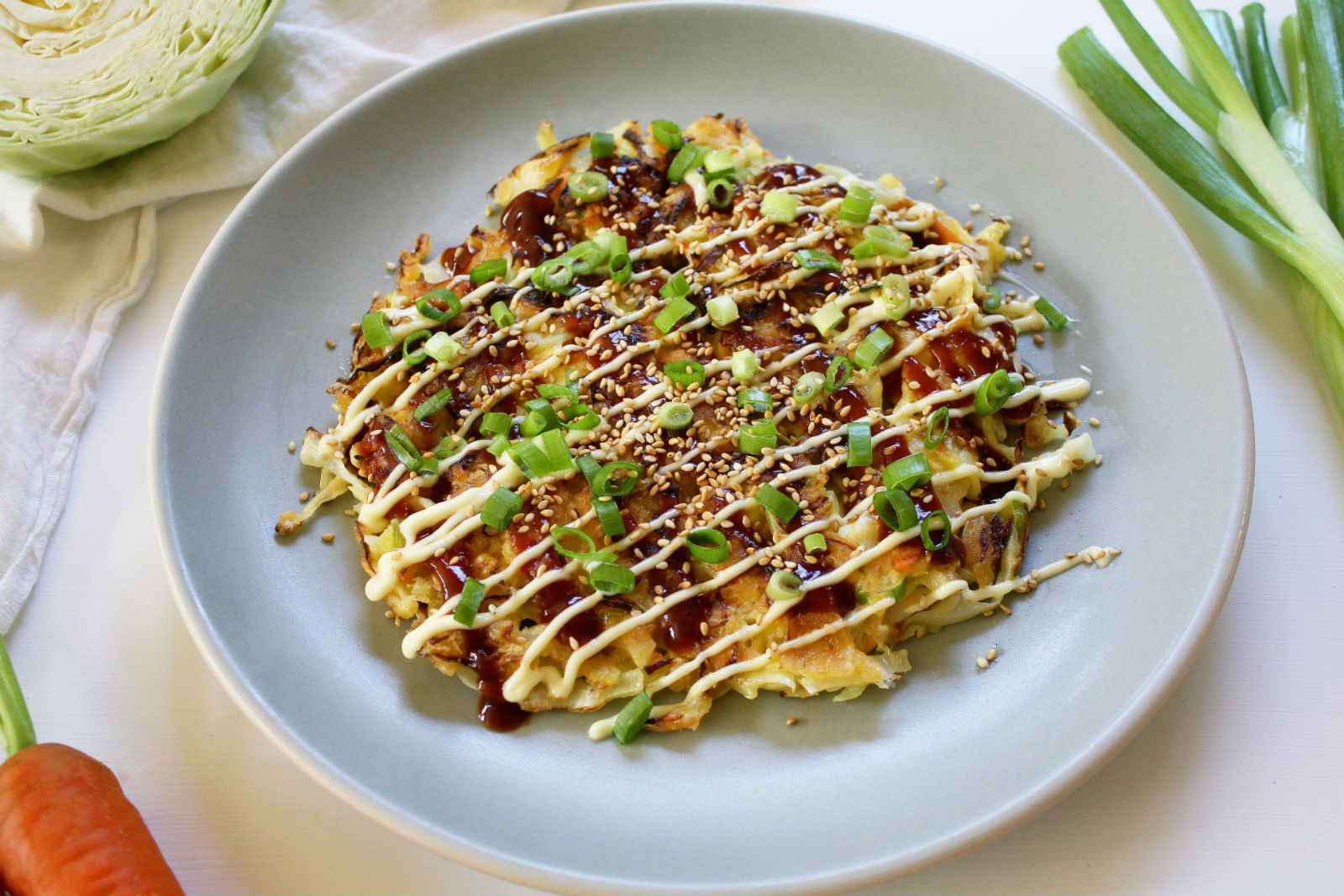 For the okonomiyaki sauce: 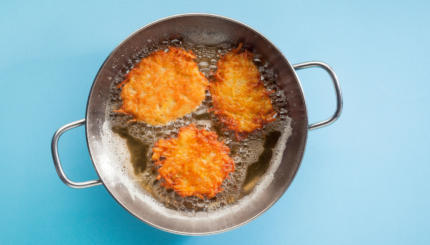