In the chill of January and February, comfort foods are more than just a welcome respite on the table. For a soul-warming winter dish, I often make soup. And there is one soup that I make that combines several of my favorite flavor profiles: Chicken soup (read: Ashkenazi all the way) with leeks (read: French- and Sephardic-influenced), albondigas, or little meatballs (read: Arab- and Mediterranean-influenced) with quinoa (read: healthy and Latino-influenced). 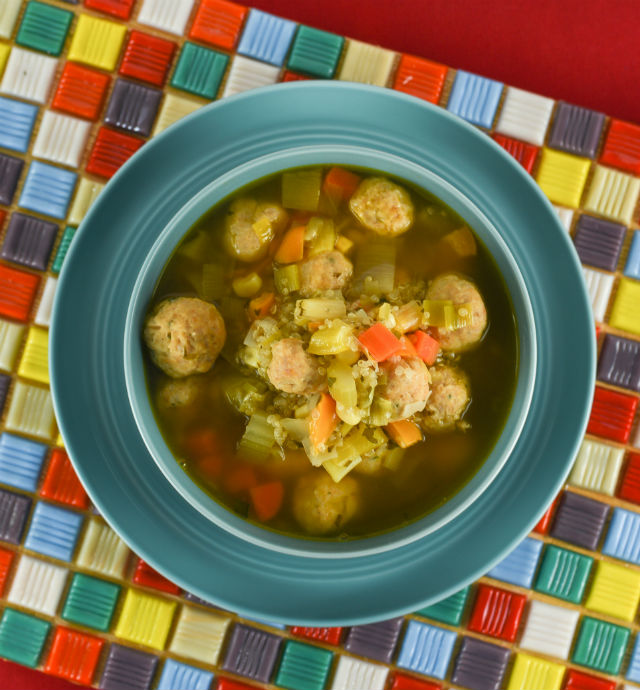 Quinoa has been a culinary darling for a number of years, but this Peruvian–Bolivian grain is worthy of the attention it gets. It’s packed with protein and gluten free. Oh yes, and it’s kosher for Passover too. The key to quinoa is to rinse it well and let it drain before using, and cook it until the little white circles—those cute curlicues—lift away from the center of the each grain. 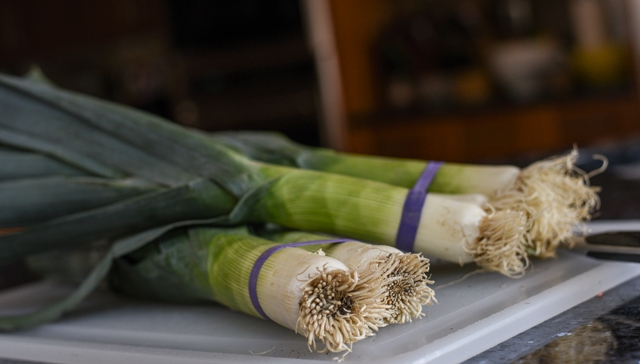 In the U.S., leeks, unlike quinoa, are still living in the shadow of other foods—largely by other members of the allium family, like onions. But leeks have a wonderfully gentle flavor that has always been loved in many other areas of the world. Now, they are a bit messy to deal with since soil is embedded between those big leaves.But you can buy them already nice and clean, all cut up, in well-stocked grocery stores, either in the produce aisle or freezer case.

Albondigas means meatballs in Spanish, though they aren’t Spanish at all – they originate from the Middle East. And just about every culture in every country has come up with their own meatballs, based on what they had available and their favorite herbs and spices. For Latino countries, that often meant onions, a bread-style binder, eggs, and fresh, local herbs such as flat-leaf parsley, Mexican oregano, mint, and epazote (another Mexican herb). In Mexico and Central America the most common way to eat little meatballs is in soups. 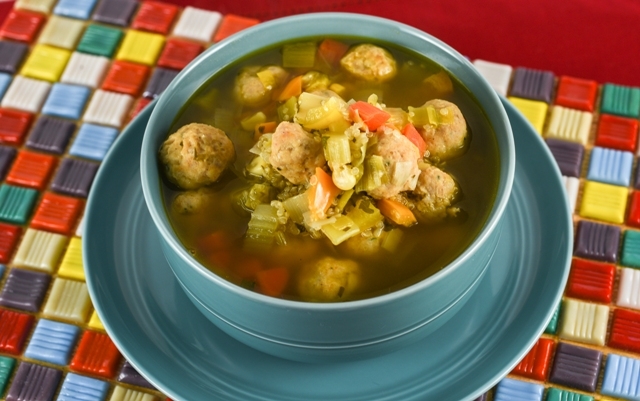 This chicken soup is an amalgam of flavor profiles, with a distinct emphasis on Latin flavors. Enjoy it—and make it your own; the recipe is as much a formula as a template for your favorite flavors. So reach for what you like best, and have fun with comfort foods from around the world.

To clean leeks, remove the tough green outer leaves and root ends.  Cut them in half lengthwise and slice crosswise in half-circles. Fill a bowl with water, place the leeks into it and wash well, separating the interior layers with your fingertips. Leeks absorb huge amounts of dirt and sand as they grow, so keep washing until they are perfectly clean; the dirt should fall to the bottom of the bowl while the leeks float to the surface. Lift the leeks out of the bowl and set aside. (Don’t drain by pouring the water out of the bowl over them or you will be pouring the dirt back onto them.) Rinse the bowl thoroughly, fill with water, return the leeks to the bowl, and soak until you are ready to use them.

Pimenton, a sweet smoked paprika is Spain’s favorite seasoning. It imparts both sweetness and smokiness to recipes and is beloved throughout the Mediterranean region.

For the albóndigas (little meatballs)

Prepare the soup: In a large saucepan or Dutch oven set over high heat, heat the oil until it shimmers.

Add the leeks and cook for about 5 minutes, until they begin to wilt and become transparent.

Reserve 1 to 2 tablespoons of the parsley in a small bowl for garnish.

Add the carrots, celery, peppers, oregano, corn, bay leaves, and parsley and continue to cook, stirring occasionally for about 7 minutes, until the vegetables wilt and become transparent.

Add the chicken broth and bring to a boil; then reduce the heat to a low simmer. Partially cover by placing a lid on the pot, so that about an inch or more of the surface of the soup is exposed. Continue to cook as you prepare the meatballs.

With slightly wet hands, form the mixture into meatballs (about ½ inch in diameter), dropping them directly into the broth as you go. Wet your hands again when the meatballs begin to stick. You should have about 75 little meatballs.

Once all the meatballs are in the broth, increase the heat to a low boil and add the quinoa. Cook, stirring occasionally for about 15 minutes, until the meatballs are cooked through (the inside will no longer be pink) and the quinoa is tender and a white ring appears around each seed. Season the soup to taste with salt and pepper if necessary. Garnish with the reserved parsley.

Forget slaving over a hot stove and set your slow cooker for one of these delicious recipes. 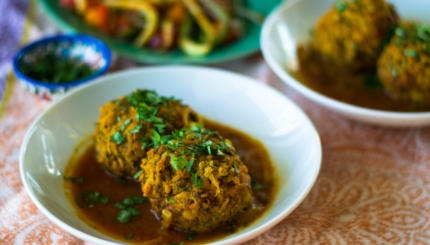 Koofteh are Persian meatballs with many different variations, including lima beans or meatballs mixed with only rice, or in this ...