Have you heard about The Hester? Operating out of the Ditmas Park, Brooklyn home of Itta Werdiger Roth and her husband, the writer Matthue Roth, The Hester is part speakeasy, part pop-up locavore restaurant, part music club and 100% kosher. Crain’s called it a “Secret Schmooze club” back in December.

But what is it exactly? How does one go? Where did it come from? And what is in store for its future?

This week I had the chance to chat with Itta and learn more about how The Hester was born and what lies ahead for the one-of-a-kind kosher food venture. 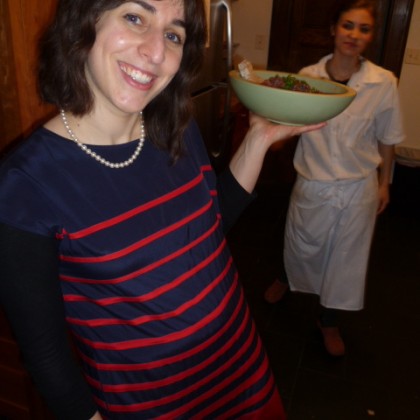 Melbourne-born Itta comes from a large, Lubavitch family for whom “community entertaining” was just part of her upbringing. Itta is one of seven children and credits her love of entertaining to her large family who was always opening up their home for celebrations, including a large Purim party they held for their community each year.

“I feel like I was just born into it,” she shared. “The act of opening up your home. A lot of people grow up that your home is a private place, but that’s just not how I grew up.”

But what makes The Hester unique isn’t just about the space it’s operating in: it’s also very much about the food, which focuses on local, seasonal items. “It’s a celebration of really good vegetables” says Itta. The menu features dishes that are dairy but also items catering to those with special diets. At one of their last events they featured a seasonal rhubarb cocktail, and Itta herself has been churning out homemade ice cream in flavors such as lavender vanilla. Drinks and music are an integral part of The Hester experience, but Itta herself focuses on ensuring the quality of the food that is served. 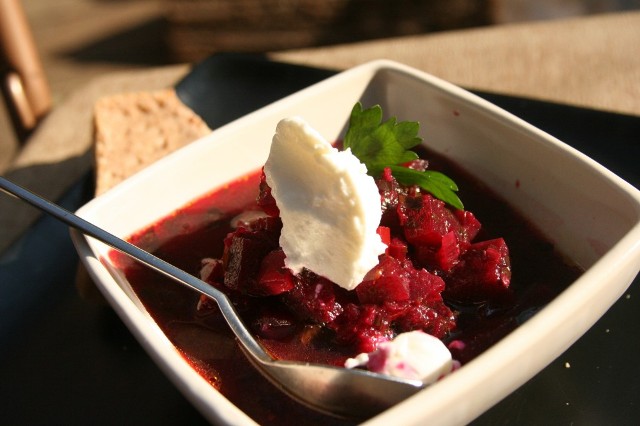 Like her love of entertaining and opening her home, Itta credits her love of cooking and fresh ingredients to her family, especially her mother and grandmother.

“I always had an interest in food, especially eating it. Everyone in my family was a good cook. My mom is a great cook and grows fresh herbs in her garden. Freshness is one of the biggest things I learned from my mom, in fact, I cannot even remember a dish that she used dried herbs for.”

It may seem like a big leap to go from a general love of food and entertaining, to running a kosher speakeasy out of your home. But Itta makes it sounds like it was the most natural of evolutions.

Itta accidentally fell into a personal chef type of job and it ended up suiting her quite well.  She went on to have a number of different food related jobs including working at the Brooklyn kosher restaurant Pardes, which she credits for teaching her about how a restaurant runs and the importance of presentation of food. 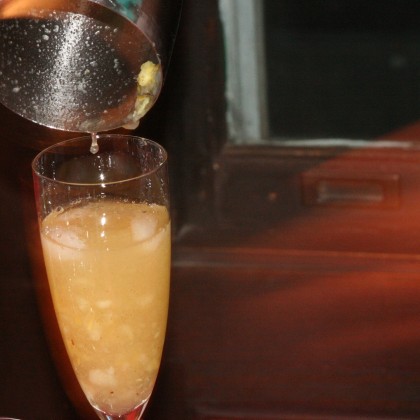 After moving into their Ditmas Park home, Itta started putting the pieces of The Hester together, talking about her vision for the project, collecting random things like extra wine glasses and tables and chairs from local restaurants. When Itta’s cousin, who is a musician in Melbourne, told her he was coming to NYC and was looking for a venue to perform, Itta exclaimed, “I know just the place.”

They had no idea how many people would show up on that first evening, but in the end there were over 100 people crammed into Itta and Matthue’s home, definitely too tightly packed in, but having fun all the same.  “The food was great. The music was great. People had a great time. I kept thinking, ‘this is totally where I want to be right now,’” said Itta.

Sometimes the name of a band or restaurant is completely random. But that’s not the case with The Hester, whose name has an awesome story behind it. Itta explained to me that it was pretty close to opening night, and they still didn’t know what they were calling the new endeavor. Itta started researching the names of different speakeasies and Jewish gangsters for inspiration. And pretty soon her sister discovered a woman named Kate Hester, a real woman, who had owned a saloon in Pittsburgh that continued to operate even after a ban on liquor. Kate operated the saloon illegally, and whenever her patrons would get too rowdy she would say, “speak easy boys.”

Itta says “she was like the mama of speakeasies.” And thus the name, “The Hester” was born. But the name is also a biblical reference to Esther as well as a nod to Jewish Eastern European immigrants who settled in New York on Hester street. Any way you slice it, a pretty cool name.  And Itta is a pretty cool kosher speakeasy mama in her own right.

When I asked Itta about her and her husband, who is a writer and video game designer, and whether she thinks they are out of the box for the orthodox community, she pushed back, saying, “There’s lots of different kinds of people, and some of them are orthodox. Maybe we are unique in some ways, and maybe we aren’t so unique also. But it’s time that people stop stereotyping. There are a lot of Jews who think that what we are doing is just for kosher people, but it’s not. It is a unique experience for everyone, not just kosher-keeping Jews.”

So what’s next for The Hester? Itta shared that she is ready for her vision to move from operating out of her house and into a more permanent space. And while she has thus far operated without official kosher supervision, she recognizes that it won’t be practical not to have a hechsher moving forward.

She has enjoyed hosting small sit down dinners of 20-25 guests in the past couple of months and aims to do more of those, while still hosting larger events from time to time. Not surprisingly, the smaller events are more manageable for Itta and her staff and take less out of the busy mom.

Check out The Hester’s website and Facebook page to stay tuned about their upcoming events. I know I can’t wait to see what Itta does next.

Tender meatballs, chicken wings, and a heavenly sweet and sour sauce make for a delicious twist on a classic. 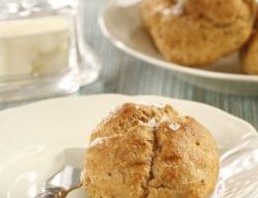 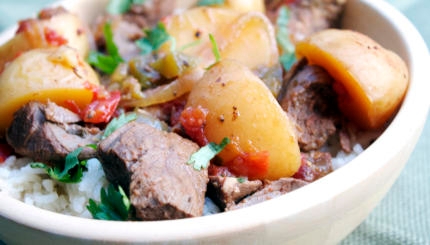