Salmon with Maror and Honey

The first time I heard of “Montreal-style Deli” was a few years ago when i was still working for Edgar M. Bronfman’s foundation. We were visiting the Hillels of Montreal and I was sent on a mission: go and procure some smoked brisket for Edgar from Schwartz’s deli. It’s his favorite. Of all my assignments during my time working there, this was, without doubt, my favorite. Brisket. Done. I still have the receipt hanging at my desk.

So when Mile End Deli opened in Brooklyn in 2010, I knew Edgar would love it. And I was right. I like to think I am usually right when it comes to food.

And last night, worlds (and Bronfmans, and celebrities and rabbis) all collided at the launch party for The Bronfman Haggadah, a new Haggadah written by Edgar with gorgeous artwork by his wife, the talented Jan Aronson. While Mile End served up Passover-inspired dishes, providing the perfect accompaniment to the evening’s festivities of modern and traditional.

Mile End’s website says that it is “a Jewish delicatessen in New York City committed to breathing new life into old-world traditions.” And I can’t think of a better way to describe the Haggadah Edgar has created. For some the Haggadah will feel very foreign: entirely in English, with some different songs and the purposeful act of welcoming Elijah earlier in the Seder. But for others, for whom the Judaism of their childhood never quite fit; for those who never experienced a Judaism which fit or not; or for those just looking for something different, this Haggadah may find a new place as part of your family’s tradition.

In his remarks last night, Noah Bernamoff of Mile End explained, “Everyone knows what Jewish deli food is. We like to ask ourselves the difficult questions about Jewish food.” 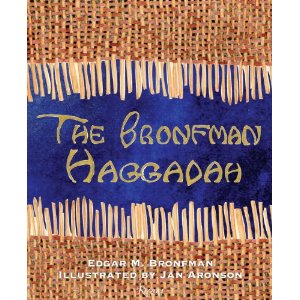 If nothing else, Passover is a time for storytelling, asking questions and food. And the dishes Mile End served last night definitely fulfilled its mission of breathing new life into old-world traditions. Duck pastrami served on a matzo brei cake with green apple haroset; pickled deviled eggs; and braised brisket with green figs on spiced matzo, just to name a few. They posted their full menu from the Haggadah launch on Instagram last evening, so please, take a peak! Above all, each bite tasted like something familiar, and also something brand-new. I will give one word of critique: I didn’t love the take-home macaroons, which most closely resembled and tasted like the variety you can buy in the Supermarket. But I’ll let it slide. Mile End isn’t known for their baked goods.

I remarked to Rae Bernamoff of Mile End that I couldn’t decide which mini dish was my favorite, but in the end I have say, the crispy gefilte fish cake stood out to me. I never ate gefilte fish growing up. My grandmother, while a wonderful (and hilarious) woman, is a terrible cook and exclusively served the gefilte fish out of a jar, which most closely resembles a ball of lint you might pull out of the dryer. It wasn’t until well into my teens that i had my first real bite of the Ashkenazi classic and fell in love. Slathered in spicy horseradish, it is now a favorite, and a staple at my seder.

But Mile End’s version was crispy, slightly sweet and tasted almost like a gourmet fish stick or mini cod cake. Served with chrein cream and pickled carrot…well. I ate two. And I ate three of the pickled deviled eggs. But I digress.

If you’re in New York, please check out one of Mile End’s two locations. And if you’re still looking for the perfect Haggadah for your family, have a look at The Bronfman Haggadah.

Wishing you and your family a  Passover celebration infused with relevant traditions and delicious dishes, both new and old alike. 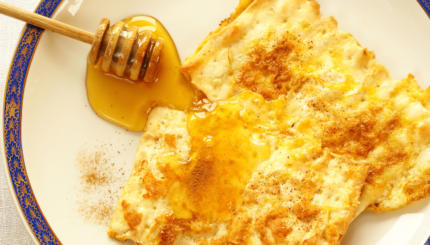 An easy Passover breakfast that can be made sweet or savory.