Canter’s Deli, a Los Angeles institution and one of California’s oldest delis, was preparing to reopen their doors this week, following a two-month closure for the COVID-19 pandemic. At the same time, thousands gathered nearby to protest the murders of George Floyd, Ahmaud Arbery, Breonna Taylor, and countless other Black Americans at the hands of the police.

Family members encouraged owner Marc Canter to delay his reopening to avoid any danger to his staff if the protests escalated. But even as dozens of police officers began to line up outside the storefront, the LA Times reports, Canter’s remained open, with a message: Black Lives Matter. The phrase was written on signs hung in the restaurant’s windows in solidarity with the protesters.

“Canter’s believes that Black lives matter,” read a post on the deli’s Twitter account Saturday evening. “In support of the Black Lives Matter movement, we are putting out free bottles of water for protestors. Please stay safe.”

In support of the Black Lives Matter movement, we are putting out free bottles of water for protestors.

According to the Times, as the night progressed, Canter’s also provided food and the use of the deli’s restrooms to protesters. “If you’re walking around all day, at some point you have to eat,” Canter noted.

“We support free-speech and anything that’s peaceful,” Canter said in an interview with the Jewish Journal of Los Angeles. “There are people coming out of the woodwork that are trying to blend in with the real protesters that are just troublemakers looking to take advantage of the situation and not very interested in what is being protested.” Later in this interview, Canter said his restaurant has always had a great relationship with the LAPD; in his conversation with the Times, however, he noted that his firsthand observation of the protest indicated that much of the escalation was in fact incited by the police: “…if the police weren’t there, maybe there would have been less violence?” he mused. “I don’t think the situation needed to become so extreme.”

Thank you to our community for coming together this morning to help rebuild our Fairfax District neighborhood. We deeply appreciate all the love and support. Please stay safe.

This isn’t the first time Canter’s has served the community during times of unrest. During the 1992 Rodney King riots, Canter recalls selling groceries to people in the neighborhood because the supermarkets were closed. He seems to feel that by remaining open and providing a necessary service, his business is likely to be safer than if he’d simply boarded up the windows and left.

After opening their first deli in Jersey City in 1924, the Canter family relocated to Los Angeles following the 1929 crash. In 1931, Canter Brother’s Delicatessen opened in Boyle Heights, a predominantly Jewish neighborhood at the time. They moved to their current location on Fairfax for a larger space (it used to be a movie theatre) in 1953 and have been there ever since. As the 24-hour deli is only closed on Jewish holidays, the place swiftly became a go-to hangout for folks in Hollywood looking for a late-night pastrami sandwich after a shoot. 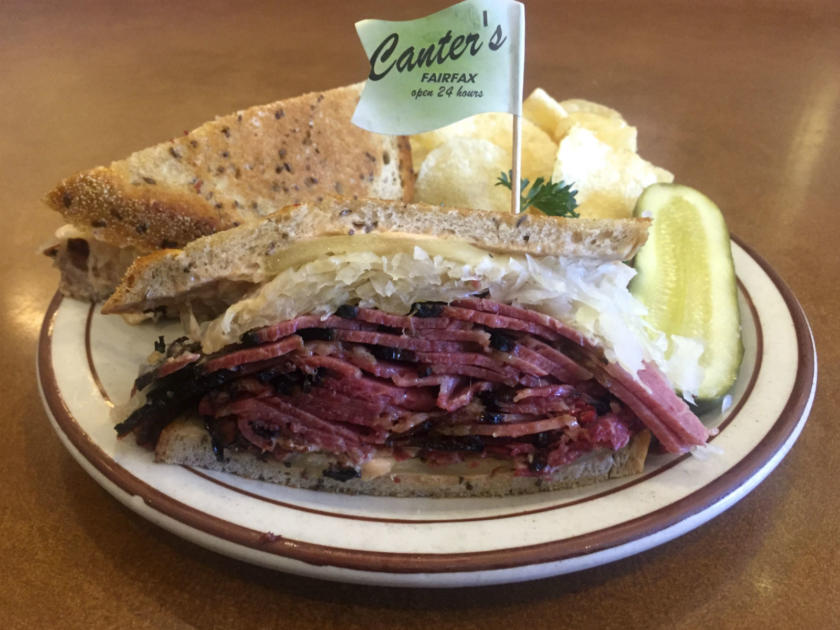 The delightfully retro ambiance of the restaurant keeps the place packed with tourists and locals alike. Though some say the food can’t compete with some of LA’s other Jewish delis, it’s hard to complain about any place that can provide you with matzah ball soup and latkes at 2:00 am.

Though Canter’s is known for being open 24/7, and Canter intended to keep the restaurant open to provide service to protesters, the police eventually shut down the deli on Saturday night just before the 8:00 pm curfew; the only damage done to the site was a bit of graffiti. Just a few days later, Canter’s officially reopened for safely reduced dine-in service. 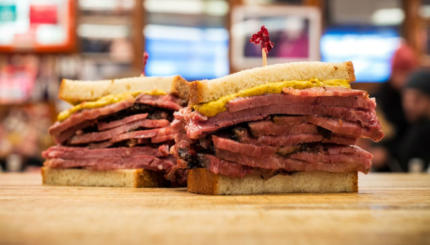 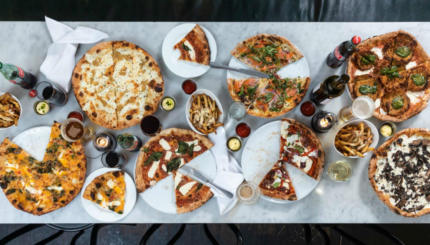 Pastrami and pickles pizza is delicious.