Hanukkah would have to be my favorite time of year. I was born on the fifth night and I even got married on my birthday! No, I don’t usually get three presents, but I always felt lucky to be surrounded by so much mazal on my wedding day. 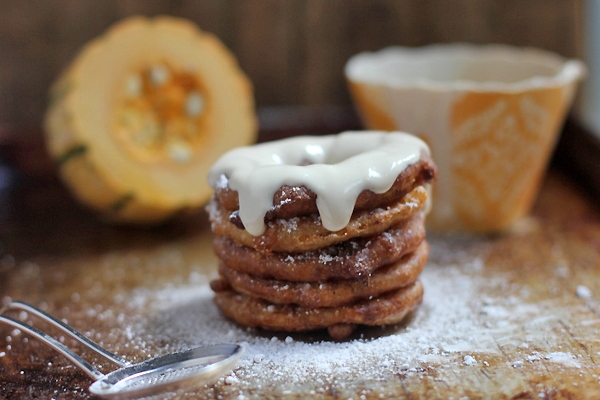 With so much to celebrate during the holiday I try to switch things up during all the frying. There’s only so many latkes and jelly donuts you can eat (ok, maybe not). Fried zucchini parmesan chips have become a family favorite, so this year, I decided to go sweet with a different type of fried veggie: delicata squash. 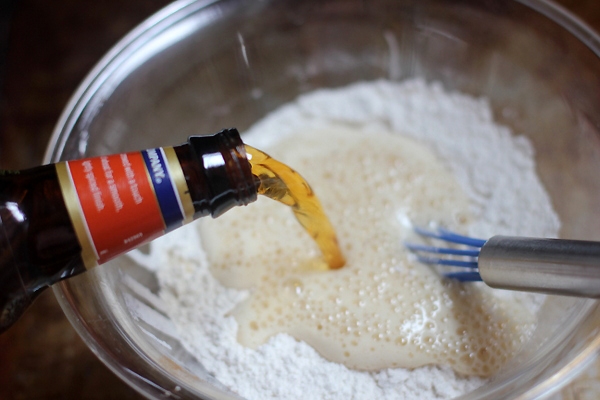 Delicata squash is such an easy squash to prepare because the peel is edible, so you can just slice and bake – or fry! To take the squash flavor a step further, I decided to make a pumpkin beer batter and I finish it off with a Greek yogurt dipping sauce, to honor the Hanukkah miracle, and the tradition of eating dairy during the holiday. I love how they look just like donuts, but you get to without quite as much guilt because, after all, you’re really getting in a serving of veggies. 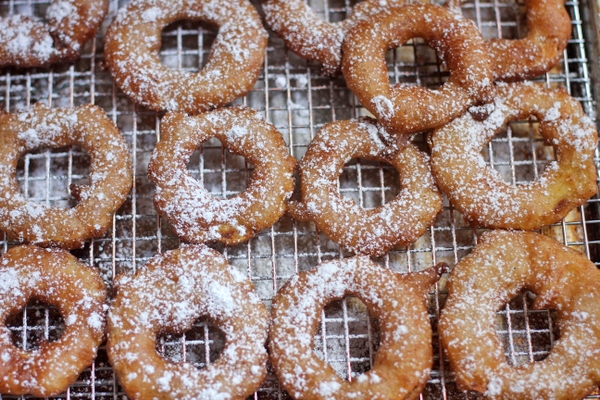 For the cinnamon-scented powdered sugar:

For the Greek yogurt dipping sauce:

Add the flour, cornstarch, sugar, spices and salt to a bowl and whisk to combine. Pour in the beer and stir until a thick batter forms. It should be a little thicker than pancake batter. You’ll need most of the bottle of beer (with about 1/2 cup left over).

Heat a few inches of oil in a saucepan to 350 degrees.

Dip the squash in the beer batter and place in the hot oil. Fry a few at a time until golden brown on one side, and then flip over to brown the other side.
Remove with a slotted spoon or spider and drain on paper towels.

To make the Greek yogurt dipping sauce: Add all the ingredients to a bowl and stir to combine.

Dust with cinnamon-scented powdered sugar and serve immediately or remove to a rack, to keep crisp and reserve for later. Serve with greek yogurt dipping sauce.

A Latin twist on a classic Hanukkah dish.