It was beige. It was dry. It was boring. And my mother bought it, week after week. Who could have guessed that mandel bread (AKA mandelbrot), a Jewish baked good that I remember as the dullest dessert of my childhood, would enjoy newfound life during the pandemic?

Several of the purveyors of 21st century mandel bread promise that it’s nothing like the cookie your grandmother or local Jewish bakery made. Our forefathers’ version was, according to Gil Marks, author of Encyclopedia of Jewish Food, “a twice-baked cookie” known for its long shelf life and easy preparation. It was typically made with oil, not butter, and thus could be eaten with a meat meal under kosher law. And because it was baked twice, it was hard enough that when dunked in a glass of tea it softened up yet didn’t fall apart.

Michael Reiss, a general contractor in Miami, made mandel bread for friends and family for years, occasionally selling them to local delis under the name “Michael’s Mandel Bread.”  He stopped baking them regularly in 2003, saving them for special family occasions, like his daughter, Kimberly Pertnoy’s, wedding. Pertnoy explained the mandel bread became “too much of a demand to be a side gig.”

But then COVID-19 hit, and people wanted his cookies “We’re stuck in the house,” they said. “How do we get some?” On May 31, a couple of months into lockdown, Pertnoy created an Instagram account (@michaelsmandelbread) for Michael’s Mandel Bread, offering 15 loaves for sale at $25 each. Within 30 minutes, they were sold out. By July, demand for the product was so high that they began to ship them all around the country. To date they have been sold in 47 states and featured in The New York Times.

Reiss’s mandel bread is baked only once, resulting in a softer cookie. His website says that, “It’s Not a Cookie. It’s Not a Cake. It’s In a League of Its Own. It’s Not Your Grandma’s Mandel Bread.” Instead of almonds or other nuts, Reiss uses an extract from apricot pits that gives an almond flavor to the cookie.

Dani Harris, the owner, founder, and baker at danimandel.com uses a similar marketing strategy, describing her creations as “Not your bubbe’s mandel bread.” She began selling her “sweet but salty” take on mandel bread in April 2020 due to lockdown and resulting unemployment.

Her first month, she took in 50 orders — all via Instagram (@dani.mandel) and word of mouth. She now sells several times that. “There’s lots of challahs and banana breads and little cupcakes out there,” says Harris. “I want to be in every grocery store in the [New York] city. You don’t see mandel bread sitting there.”

Baker Melissa Blasberg, owner and founder of Balaboosta’s Bakery, agrees. Her product line includes a long list of Jewish baked goods, but her heart belongs to mandel bread, which she started baking when she was three years old but selling, to great excitement, at the start of 2021. She would “love to be a mandel bread-only business. You don’t see a lot of it out there. It’s so special and so different.”

So what’s the draw? Childhood memories are part of it, especially for Jewish customers who grew up with it. Pertnoy, however, now Michael’s Mandel Bread’s marketing and social media director, says they are not marketing the product as “Jewish.” Jews are nostalgic about it, said Pertnoy, whereas non-Jewish customers try it with no expectations — and they think it’s good.

A Philadelphia-based couple, Sherri and Michael Leon, are pharmacists by day and the bakers behind Noshes by Sherri at night. They sell hamantaschen, babka, and other Jewish baked goods, as well as mandel bread, but during the pandemic, mandel bread sales have gone up “exponentially,” said Sherri Leon. It now represents 30% of their business. They have stretched the mandel bread boundaries by making sweet and savory versions, like their asiago cheese and slivered almond mandel bread. Not your grandmother’s mandel, indeed.

All the mandel bread bakers mentioned its long shelf life — up to three weeks, depending on who you talk to — and how delicious it is to freeze the cookies and eat them cold. 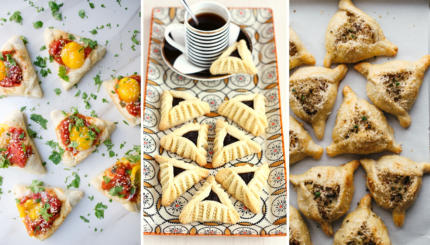 The Most Wild Hamantschen You’re Going to See This Year

Our top picks for most delicious and outrageous Purim treats this year. 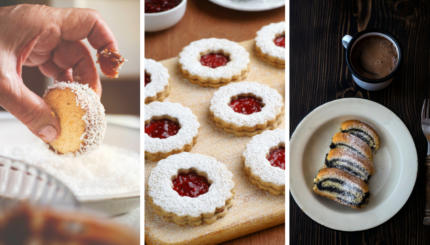