If you’re lucky enough to snag a seat at Che Fico in San Francisco, one of the hottest restaurants in the U.S., don’t be surprised to see Stars of David on the menu. The food there is rustic Italian, featuring handmade pasta, pizza, and salumi. The stars represent dishes from Italy’s Jewish community. Chef David Nayfeld incorporated Jewish food in his menu to give “a nod” to his roots. 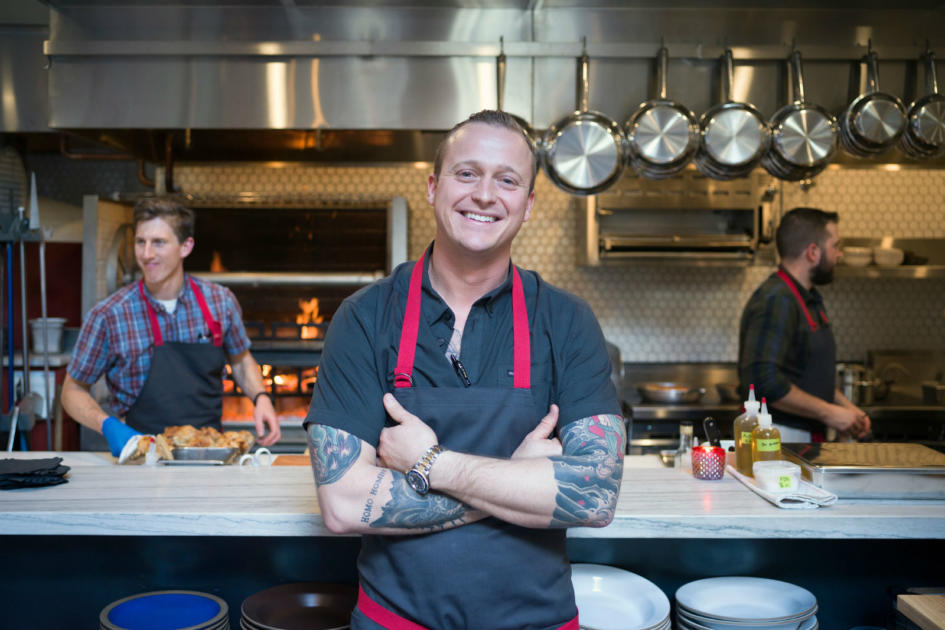 Nayfeld is not Italian and he didn’t grow up eating Italian food. As a child in the Bay Area, he ate lots of Mexican food out of the house. At home, he had Belarusian dishes prepared by his grandmother, like draniki, a stuffed potato pancake. His parents, Jewish natives of Belarus in the former Soviet Union, came to the Bay Area before Nayfeld was born. They arrived, he says, with $30 in their pockets, and worked and studied to support their family, which soon increased with David’s arrival.

By the time he was 9 years old, Nayfeld, a self-described “latch-key kid,” was cooking. Following high school, he opted to forego college and study instead at the Culinary Institute of America. And there his trajectory began, working at a series of Michelin-starred restaurants with some of the most respected chefs in the world, including master French chef, Joel Robuchon.

In 2007, he was hired at Cru in Manhattan, an award-winning restaurant where he encountered his first pasta tasting menu. “I found the handmade pasta to be extraordinarily exciting. I connected with it in a way I had never connected with a particular cuisine before.”

After several years at Cru and then at Manhattan’s 11 Madison Park, as well as other world-renowned temples of fine cuisine, he kept coming back to pasta. He studied pasta making in California and knew that his next step would be to spend more time in Italy.

Before Nayfeld left, his father, who had spent six months in Rome after he left Belarus while waiting for his visa to the United States, urged his son to see the Jewish ghetto in Rome. “Go visit it,” he said. “It is a huge part of our history.”

Nayfeld also began to read about the history of the Jews of Italy. “The more I read, I came to see that so many of the foods that I associate with Italian cuisine came out of the Jewish ghettos.”

But one place in particular galvanized his thinking. “One of the most powerful moments I had during my visit to Rome and the Jewish ghetto was while sitting at the square Campo de’ Fiori,” says Nayfeld. “Campo de’ Fiori is known as the place to go to get some of the best Roman-style pizza in the city. But it is also known as the site of a huge book burning in 1553. It was in Campo de’ Fiori that members of the Inquisition gathered every copy of the Talmud that they could find throughout Italy and had them burned. That square was pasta and pizza and Jewish roots in one spot.”

When it came to developing a cuisine, Italian Jews had slim pickings. They were allowed to choose from “the trash of the market, the food that is left for sale at the end of the day,” says Nayfeld. Jewish Italian food used lots of organ meat — like ravioli stuffed with ground sweetbread, kidney, heart, and lungs, items that Nayfeld calls tertiary cuts of meat. They also used lots of vinegar to cut what may have been “off” flavors from meats that had been sitting in the sun all day.

Herbs were a central ingredient in the Cucina Ebraica (Italian Jewish cuisine). “Herbs were inexpensive and a great way to flavor things that may have had an off-putting flavor,” says Nayfeld. On the menu at Che Fico, you will find beef tongue — a tertiary cut — served with a salsa verde, an herb sauce. Suppli, also on the menu, is another classic Italian dish with Jewish roots. The fried risotto balls are stuffed with cheese, and were traditionally made with day-old risotto. “No food in the Jewish ghetto would go to waste,” says Nayfeld.

The orecchiette, also marked by a Star of David, is a shape of pasta native to the coastal region of Puglia, and was often prepared with pork sausage. Since the Puglian Jews would not eat pork, they prepared lamb sausage instead, as sheep were also raised in the area. It was a similar dish to what their neighbors ate, but one that satisfied the guidelines of kosher eating. Che Fico’s orecchiette is served with lamb sausage.

The Jewish dishes on the menu, which change with the season, “do quite well,” says Nayfeld. But what does not change is Nayfeld’s allegiance to the central pillars of Italian Jewish cuisine — food that, out of lack of choice, was made of the simplest ingredients yet turned into something delicious.