Las Vegas may not be considered one of the top havens for Jewish food in the U.S., but you may be surprised to learn how many Jewish and Israeli-inspired eateries exist in Sin City. Las Vegas has been attracting Jewish citizens since the 1850s, during the Western Gold Rush. Again in the 1960s, the city began attracting a larger community.

But in recent years, particularly as Jewish food has gained popularity across the U.S., Jewish eateries are cropping up all over the city for the tourists looking for every possible culinary experience under the sun, which yes, includes Jewish deli and Israeli-inspired Mediterranean fare.

Heading to Vegas for some debaucherous fun? Check out one of these stellar restaurants when you’re not hitting the slots or the shows.

That’s right — you can get Los Angeles’ famous Canter’s Deli sandwiches, bagels, and schmear in not one, but two locations in Las Vegas. Canter’s has been an institution in Los Angeles since 1931, and their Las Vegas outposts feature all the classics you crave: hot pastrami sandwiches, matzah ball soup, and cheesecake.

While New York City’s famous Carnegie Deli in the heart of Manhattan may have closed, their Las Vegas location is still churning out their signature mile-high sandwiches. Located in the Mirage Hotel, they are also serving up chopped liver, matzah ball soup, and an array of breakfast classics all day long.

Started by New York transplants 20 years ago, this bagel and bialy shop is also serving up house-made knishes, overstuffed deli sandwiches, stuffed cabbage, and a great selection of desserts like mandel bread, rainbow cookies, black and white cookies, and cheesecake. They have two locations in Las Vegas.

The Tel Aviv-born burger chain Burgerim has one delicious outpost in Las Vegas, with several other locations in Nevada also in the works. Featuring mini burgers, fresh salads with tahini and lemon, Israeli-style “chips” (i.e. round, thin french fries), and their signature shakes, this is truly American comfort meets Israeli freshness at its best.

One of the many kosher eateries in the city, Haifa customers love their traditional Moroccan and Mediterranean-inspired menu. Like many kosher restaurants, the menu is eclectic, featuring everything from Moroccan-style meatballs to deli sandwiches to Yemenite soup.

Also kosher, this casual eatery offers fluffy pitas stuffed with falafel, meatballs, and shwarma freshly sliced. Be sure to come on Sunday when they serve up steaming bowls of shakshuka, sabich, and malawach, too.

New York City’s beloved vintage style brunch spot, known for their hand rolled bagels and lox spread, has finally arrived at the Bellagio Hotel and Casino. The new location will offer its classic staples like cheese blintzes and fried chicken, as well as some Vegas exclusives, like avocado toast. 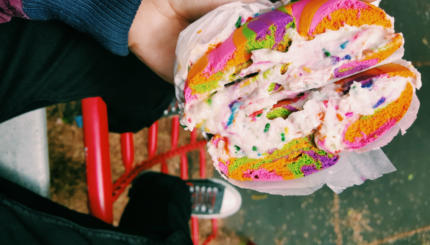 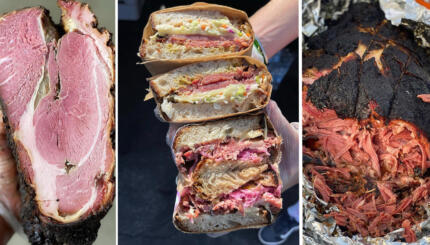