The first time I tried vegan bacon, it was made of mushrooms. It was sprinkled atop a melty cashew mac ‘n cheese, and because vegan meat isn’t typically too noteworthy, I was surprised that it actually looked and tasted the part.

Bacon is one of those flavors that’s hard to replicate — somehow it’s both chewy and crispy, and embodies that magical umami blend of smoky, sweet, salty, savory and, of course, fat. No food lab can accurately get this complex taste, smell and texture experience quite right. But the completely homemade, vegetable-based varieties that I’ve seen in vegan restaurants, through some vegetable wizardry, make it happen! The best part is, you can easily make it at home.

Below are about a dozen ways that you can make vegan bacon out of whole foods. Get your hands on some liquid smoke and get sizzlin!

How to Make Mushroom Chips by Bon Apetit

Jackfruit Bacon from One Green Planet

Easy Tofu Bacon from Eat Within Your Means

Beet Bacon from One Green Planet 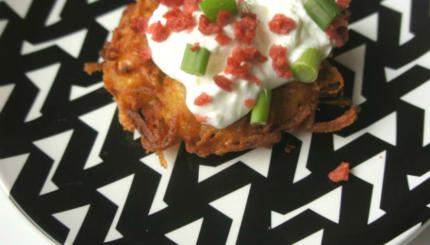