Scan the menu of just about any Greek restaurant in the U.S. and you will see avgolemono listed prominently in the soup and salad section. A thick, velvety concoction of chicken broth, rice or orzo, egg, and lemon, avgolemono soup is firmly fixed in most Americans’ minds as an iconic Greek dish.

Yet the origin of this soup is not Greek at all, but rather Iberian — and Jewish. You can trace a line directly from agristada, an egg-and-lemon sauce that Claudia Roden calls the “cornerstone of Sephardic cooking” to Greek avgolemono. What’s more, the Sephardic version of this soup, known as sopa de huevos y limon (egg and lemon soup), is the traditional way to break the Yom Kippur fast for Jews from Turkey, the Greek port city of Thessaloniki (known as Salonika in Ladino), and the Balkan states.

Like so much in Jewish cuisine, agristada sauce grew out of necessity, specifically the strictures of kosher dietary laws. Prohibited from using dairy in sauces that would accompany meat dishes, Sephardic cooks in Spain — hundreds of years ago — developed a tart sauce that relied on tempered eggs as a thickening agent.

In the Middle Ages, before citrus was widely cultivated in Europe, verjus — a highly acidic liquid made from pressing unripe grapes — was used to give the sauce its sour flavor. But after the 10th century, when lemons became a popular crop around the Mediterranean, inspired in part by Jewish famers who were cultivating etrogs for Sukkot, lemon juice replaced verjus as the standard souring agent for agristada.

When the Iberian Jews were expelled from Spain during the Inquisition, they brought agristada with them as they traveled to destinations in the Ottoman Empire — modern-day Turkey, the Balkan states, and Greece.

Ottoman diners already had a penchant for sour flavors: Sour plums, pomegranates, and bitter oranges were all common ingredients in 15th century Ottoman cuisine and an early Ottoman cookbook from the same period had a whole chapter on sour foods. So it is not surprising that agristada, with its lemony bite, became part of the larger Greek and Turkish cuisine.

Over the centuries, agristada sauce morphed into avgolemono.

Avgolemono sauce is practically omnipresent in Greek cuisine, where it’s served alongside dolma and vegetables such as artichokes, as well as an accompaniment to fish and meat dishes. The sauce is also used to thicken soups and stews made with broth, many of which contain rice, orzo, or other grains — it gives the fragile emulsion added stability — and meat. In the U.S., we really only know avgolemono as a chicken soup, but in Greece it is actually a whole category of soups thickened with an emulsion of egg, lemon, and broth.

Greece is not the only country where agristada sauce lived on. The Sephardic Jews who settled in Italy adapted the egg-lemon sauce to include local ingredients, such as garlic and sometimes anchovies, calling it bagna brusca or brodo brusco. In Turkey, an indistinguishable egg-lemon sauce, which is also used to thicken soups, is known as terbiye. Agristada is even still found Spain, where it is known as salsa blanca (white sauce) or huevo y limón (egg and lemon) and served alongside fried fish or artichokes in lieu of mayonnaise.

The smooth, velvety avgolemono is thought to be gentle on the stomach, making it suitable for ending a day-long fast. But there’s no need to wait until sundown on Yom Kippur to make it at home. It makes for an easy weeknight dinner, as it comes together quickly using leftover or supermarket rotisserie chicken.

Make sure to check out the recipe for sopa de huevos y limon. 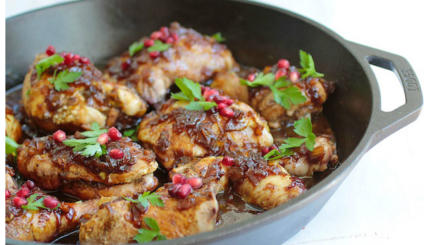 Pomegranates, or rimonim in Hebrew, are one of the most recognizable and highly symbolic fruits in Jewish culture.