Chewy with a bit of snap and a dusting of poppy seeds sprinkled on top. Or, a more pastry-like dough, boiled in water sweetened with a touch of honey, with poppy or sesame seeds pressed into the dough and a bit of char on the outside from a wood fire bake. It’s the dividing line for bagel mavens between those who are partial to the quintessential New York bagel versus its smaller, north-of-the-border relative from Montreal.

The two sides came face to face last week in the Laurentian mountains of Quebec for a little (friendly) competition between two Jewish food experts who know from bagels. Representing New York: Leah Koenig, an acclaimed and widely published writer, author of The Little Book of Jewish Appetizers and Modern Jewish Cooking.

The hometown advantage went to Kat Romanow of Montreal, a Jewish food historian and the Director of Food Programming at the Museum of Jewish Montreal, where she created Fletchers, the museum’s cafe.

The scene was KlezKanada, a week-long retreat which attracts hundreds of participants who immerse themselves in Klezmer music-making, Yiddish culture, and the camaraderie of an intergenerational crowd that includes families with kids from North America and across the globe. There are Orthodox and egalitarian services and many of the participants are not Jewish, but fans and students of Klezmer music.

Founded in 1996, KlezKanada, held at the lakeside Camp B’nai Brith in Lantier, Quebec, offers an array of workshops that are an embarrassment of riches that includes music instruction, Yiddish song, workshops on Jewish history, and Yiddish language classes led by scholars and experts who are top in their fields. The music faculty and performers are a “Who’s Who” of the Klezmer music scene.

Koenig’s first exposure to KlezKanada was a decade ago, when she tagged along with her then boyfriend, Yoshie Fruchter, a jazz guitarist. The romance took — between her and Fruchter — and she also fell in love with KlezKanada, where they have returned together many years since. A week ago, as I spoke to Koenig via phone, the now married couple were on their way to the retreat with their 4-year-old son. Fruchter, once a student at KlezKanada, is now on the music faculty.

About five years ago, Koenig proposed a cooking class to appeal to the KlezKanada participants who are not musicians. With the camp’s kitchen already a beehive of activity, they made do with a found kitchen space in a cabin at the back of the property. “It was rustic,” Koenig said with a laugh. A few years later, Kat Romanow began leading food sessions.

This year, for the first time, Koenig and Romanow, who worked together in a program in Montreal, were enthusiastic about teaching in a new dedicated kitchen space to accommodate the growing number of participants for the popular KlezKooking workshops. Mid-week, there was a panel, “What Makes Food Jewish Anyway?” with Koenig, Romanow, and Michael Wex, Yiddishist and scholar and author of the bestselling Born to Kvetch and Rhapsody in Schmaltz, a delicious read about the world of Ashkenazi food.

Back to those bagels: Wednesday afternoon’s schedule included the Bagel Showdown, a lighthearted competition between the New York and Montreal varieties. Koenig shared, “They are really apples and oranges. Both may be round pastries with holes, but they are more like cousins, related, but different,” she acknowledged.

Heading into the workshop, Romanow said she felt the pressure of her city’s reputation. Bagels started out as a distinctly Jewish food, but they have become a beloved Montreal staple, with competing bakeries vying for the city’s customers.

At the workshop Wednesday, the group of 25 people was divided in half, and “everyone had a go at rolling and forming the bagels, boiling them (in salted water for NYC and honey water for Montreal), and sprinkling or pressing them into sesame and poppy seeds.”

The room may have started out decidedly stacked in Team Montreal’s favor, but many among the KlezKooking bakers loved the NYC bagels, Romanow wrote in an email. “They were handmade and superior to anything you can get in the city,” Romanow added.

In the end, there was no actual vote. “Both bagels turned out delicious,” Koenig shared. 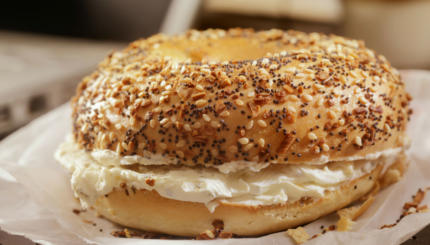 The Everything Bagel is a Surprisingly Recent Invention

It's not as classic as you may think. 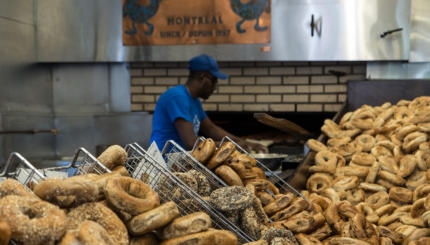 Will Montreal Bagels Soon Be Extinct?

Some Montreal politicians are pushing to get rid of wood-burning ovens. 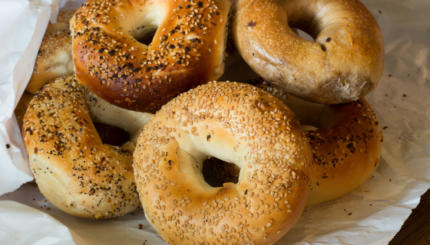 A brief history of your favorite Sunday morning nosh.