Virtual bake sales of Jewish food — from challah to bulemas (Sephardic spiral buns) to bagels — are now part of a global anti-racist movement. Yes, you read that sentence correctly: Jews around the world have joined in a movement to sell food online for racial justice non-profits.

A global Black Lives Matter movement demanding equality in the middle of a global pandemic led many to be unsure of how they can help support the cause. Whether it’s protesting, donating, calling local representatives, speaking up in town halls, posting anti-racism resources, talking to your family members, buying from Black-owned businesses, reading books by Black authors, there’s no wrong answer. The only wrong thing would be to do nothing at all.

One way food lovers have decided to make a small difference? Bake sales. This past week, bakers and chefs across the globe are joined together in a new initiative: Bakers Against Racism. Bakers Against Racism formally launched Monday, June 15, organized by pastry chefs Paola Velez, Willa Lou Pelini, and Rob Rubba. The goal is “to fight racism with the tools we know how to utilize,” a.k.a. food. Bakers are encouraged to sell a dessert on their pages and then donate the majority of the proceeds to a charity that supports Black lives. Some are teaming up with larger groups (like @BakersAgainstRacismNYC), and others have just decided to do it on their own.

Among the participants are many Jewish bakers and chefs. I spoke to nine Jews from around the world who have taken up the baking challenge to see how their Jewish identity and values have inspired them.

Recent queer Jewish college graduate Chloe Carter-Daves is an avid baker. From her Bronx apartment, she decided to join the Bakers Against Racism initiative because it seemed like a fun way to use her skills to raise money for a cause she believes in.

“To me, food and baking is political because everything is political. I make a lot of Jewish baked goods because it feels powerful to use food as a means to explore and honor my Jewish identity, and if my food can be used as a tool to further racial justice, then so much the better,” Carter-Daves, 21, explained to me over e-mail. For Bakers Against Racism, she’s baking challah, chili orange chocolate rugelach, and bulemas (a traditional Sephardic pastry; she’s filling them with caramelized onion, white beans, and herbs). She decided to fundraise for The Marsha P. Johnson Institute, an organization that fights for Black trans human rights and seeks to carry on the legacy of queer rights revolutionary Marsha P. Johnson. So far, she’s raised almost $600.

Jake Cohen, a Jewish chef with 125,000+ followers on Instagram, decided to join the Bakers Against Racism initiative because it felt like a natural part of his Jewish identity.

Participating “is an extension of tikkun olam,” Cohen, 26, wrote over e-mail, and “a small act towards repairing the world through showing not only solidarity, but actively participating in a cause that helps fund the organizations that are making a difference.” Selling brownies, and auctioning off his famous challah, was a “no-brainer.” All proceeds from Cohen’s posts will go to the Okra Project, which helps provide free and nutritious meals for Black trans people.

Cohen, who works as editorial director of feedfeed, said, “Food is political. Hard stop. It’s intertwined with so much history that it couldn’t not be. It’s the chef’s choice whether to lean into that truth or not.”

Danielle Sinay, a 28-year-old Mexican Jewish writer, echoed this idea. Food, she writes over e-mail, “brings people together and prompts dialogue.” For Sinay, step number one to opening productive dialogue is togetherness, which can be created through food.

Sinay, like Cohen, is also fundraising for the Okra Project, baking chocolate chip cookies, chocolate cakes, and flourless chocolate cakes. She’s relatively new to baking, having only taking baking up as a quarantine hobby and finding that she loves it. (She’s not alone.) She has participated in a few food fundraisers before — she remembers having a lemonade stand and bake sale to raise money for firefighters after 9/11 — but Bakers Against Racism felt like the “perfect hybrid of things about which I’m very passionate.”

In Atlanta, Georgia, Hayley Perlis, a 26-year-old Jewish middle school teacher, shared that the Bakers Against Racism initiative arrived at the perfect time. Perlis has spent the past few weeks trying to figure out the best way to contribute to the fight against racial injustice.

“My boyfriend and I did go to one protest, but he’s high risk for COVID because he’s diabetic, so we’ve decided to stay away from big gatherings for now,” Perlis explained. “On top of that, I’m a middle school teacher whose summer plans all got cancelled because of COVID, so I have tons of free time to bake, but I live alone so I often feel like I don’t know what to do with the stuff I make.” She is making brown butter chocolate chip cookies, buttermilk drop biscuits, and chocolate-dipped chocolate shortbread to raise funds for the Southern Poverty Law Center and the Metro Atlanta Mutual Aid Fund.

Rebecca Firkser, baking out of her parents’ house in Montclair, New Jersey, has been feeling helpless for the past few weeks.

“I’ve been making donations and trying to share information on protests and marches, defunding the police, and other anti-racism tools that I found online or in books with my family, but ultimately I still didn’t feel like I was really contributing to this movement as best as I could,” she explained. “As a white woman, I have a lot to unlearn in terms of internalized racism and privilege in general, and that’s definitely work I focus on every day within myself, but just going about my daily life in June 2020 — I work as a recipe developer and food writer — while there was so much happening outside felt weird. I wanted to do more, but wasn’t sure what. The moment I saw the [Bakers Against Racism] Instagram I knew I wanted to get involved.”

Firkser, 27, feels a connection to her Jewish identity most strongly when she’s cooking. “My desire to feed people is something I picked up from my Jewish relatives.” This week, she’s making chocolate chip cookies, tahini blondies, brownies, and vegan/gluten-free chocolate chunk cookie bars. She raised $1,800 — a very Jewish number — that she’ll be donating to the Okra Project and the Loveland Foundation, which, among many other resources, provides a therapy fund for Black women and girls.

It’s not just in America that Jews are joining in on this this global anti-racist bake sale; Joe Baur, 33, saw a post from Berlin Bakers Against Racism and decided to offer up his challahs. He’s now making six challahs for the Berlin branch, which is fundraising for the Equal Justice Initiative and Kampagne für Opfer rassistischer Polizeigewalt (KOP) Berlin.

“Berlin is a protesting city,” Baur explained. “It’s not uncommon to catch several demonstrations on one day for very different causes. But there does seem to be something different about these recent Black Lives Matter protests. It’s gotten more attention, sure, but it’s also shined a light on racism and police brutality in Germany. A lot of European cities are coming to terms with the fact that this isn’t just a U.S. phenomenon. And protests across Germany have come out in impressive numbers, spreading and supporting the message with their feet.”

Baur says that baking challah for an anti-racist cause has helped hold himself to the Jewish value of tzedakah (charity). He cites “the idea that we should leave the corners of our fields for those in need,” the Biblical idea of pe’ah. Baking challah for others and fundraising for anti-racist initiatives is fundamentally Jewish — and many were doing this before the Bakers Against Racism even launched.

Halfway across the world, Blake Hunter, a 28-year-old Oakland resident, embraced the Jewish value of tzedakah in his brand new small business. Hunter launched a bagel delivery service, Hella Bagels (@hellabagels), right before the shelter-in-place order began in California’s Bay Area. Launching a bagel delivery service during a pandemic has turned out to be a fantastic business decision.

“It felt strange [that] so much was going well for me, but my community wasn’t in the same position. Week by week, I would donate small amounts of money from the bagels to different GoFundMe links. After the murder of George Floyd, I wanted to take part in the protests, [but they] were going on while I was preparing for my weekend’s bagels. I decided, quickly, I needed to donate to the Anti-Repression Committee Bail Fund.”

That Sunday, Hunter donated 100% of the proceeds he made to the fund. The following Sunday, he did the same thing, this time donating to the Oakland Indie Alliance. The next Sunday, his funds went to Race Forward. As part of the Bakers Against Racism initiative, he is donating his Sunday proceeds to the Transgender Law Center.

“Honestly, this was the least I could do,” Hunter says. “I have the ability to bake great bagels — I needed to use that skill to give back to the community and people I have grown up with my whole life.”

Similarly, Ernesto Mandowsky, a first-generation Hispanic Jewish American, decided to use his challah baking skills for good. With his Challah Back Bakery (@challahbackbakery), he sells challah for a good cause — with a unique twist.

“I’d been feeling pretty helpless during COVID as the [restaurant] industry had essentially imploded and tensions were rising amidst the horrific acts of racism,” Mandowsky, 29, explained. “One morning, I noticed that a friend of mine was selling cookies to raise funds for Black Lives Matter LA. Feeling inspired, I tapped into my inner baker and baked a #WeAreOne Challah: a trifecta of braids using cocoa and activated charcoal powders.”

Mandowsky has been baking out of his parents’ kitchen in North Miami Beach, Florida, and as of this writing, his #WeAreOne Challahs have already raised $700 for the ACLU.

Caryn Sherbet, a 23-year-old Jewish woman baking out of Washington, D.C., started raising money for various causes a few months ago. She began selling care packages of different baked goods and candies to raise money for DC Safe, “a local organization aimed at providing immediate, material help to folks leaving violent relationships and/or abusive living situations.” After the death of George Floyd, she switched gears and began selling these care packages — along with custom cakes and pints of ice cream — to raise money for Stop Police Terror DC, Black Lives Matter DC, and the GoFundMe for Breonna Taylor’s family. So far, she’s raised over $1,700.

Again and again, everyone I spoke to shared their passion for both social justice and baking. By spending a few — or many! — hours in the kitchen, they’re now contributing a small part to the fight for a more just world. 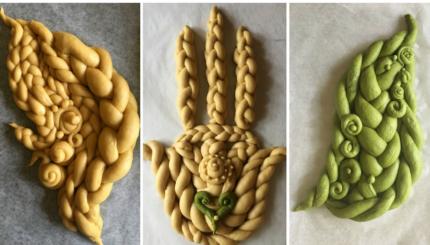 The Most Gorgeous Challah You’ve Ever Seen

Get ready to be amazed by this baker's intricate bread creations. 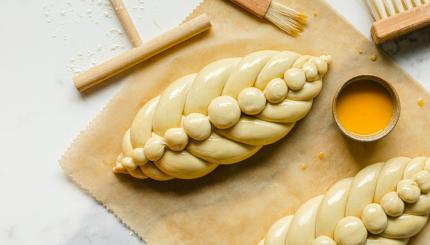 How a Non-Jewish Swiss Baker’s Challah Wowed the Internet

Her five-strand challah is a thing of beauty! 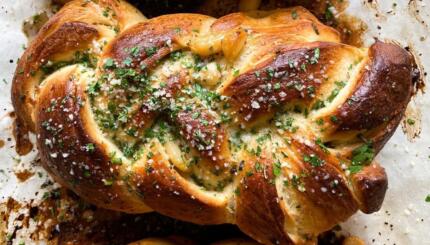