Let’s play word association. If I say chicken you might say soup or if I say potato, you could respond latke. And when I say yogurt, I’m sure your natural response would be Jewish. Did I lose you? It’s possible that words like tart, creamy, and nutritious might have been your first thought, but if you did answer Jewish, you’d be very much correct.

Yogurt and Jewish culture (pun definitely intended) have been closely linked for millenniums. You could say the connection is of Biblical proportions. It is written in the Old Testament that curds (a word interchangeable for yogurt or sour milk) were fed to Abraham’s guests when they visited his tent. Persian writings even attribute Abraham’s longevity and virility to those same curds. From Isiah to Proverbs and into Samuel 2, curds are mentioned with reverence as they were served in “lordly” bowls. It certainly solidifies the concept that yogurt was a staple in the diet of the Israelites. That’s not surprising as yogurt was serendipitously discovered by Neolithic man back in 6500 BCE in an area called Anatolia, present day Turkey. It became a centerpiece in the diets of the great caliphs and was integral as both a condiment and main course throughout the Levant and eastern Mediterranean region in Western Asia, in which Israel sits.

The Jewish connection made its way from the Mideast to Europe when King Francois the First was cured of his stomach ailments by a Jewish doctor dispatched by Sulieman the Magnificent. It is said the doctor trekked from the Ottoman empire to France on foot, as he would not ride on the Sabbath. He traveled with his personal flock of sheep, whose milk he fermented to prepare the yogurt for the king. Once cured, the doctor made his way back home where he was hailed as a miracle worker. Alas, it didn’t quite work out as well for the sheep who didn’t survive the journey back.

France remained a hub of yogurt activity when Russian-born Jewish scientist Ilya Metchnikoff began studying yogurt’s remarkable probiotic qualities. Building on the studies of Stamen Grigorov, another Jewish scientist in Bulgaria, he theorized that the Bulgarian people lived to their ripe old ages because of the yogurt they devoured. Metchnikoff received a Nobel Prize for his research and Grigorov is immortalized in his homeland for his efforts. French newspapers and those around the globe touted yogurt as the cure for old age and quipped that Bulgarians are tired of seeing their centenarian neighbors who just won’t die because they eat yogurt.

Europe remained the epicenter of yogurt when in 1912, a Sephardic Jew returned from Greece to his pre-Inquisition home of Barcelona. He brought with him a love for yogurt and began producing it in his small shop. He named the company Danone to honor his son Daniel and eventually moved the company to Paris. It was there during the Holocaust that Daniel, now running the company, encountered Nazism and anti-Semitism and wisely emigrated to New York.  He Americanized the company name to Danon and the rest, as they say, is legendary.

But it’s not just history that ties yogurt to the Jewish people, it is also its rich culinary tradition of being incorporated in many Middle Eastern dishes that Jews prepare. Yemenite Jews break the Yom Kippur fast with zom, a warm soup whose main ingredient is yogurt. It is topped with a green chili hot sauce called zhug and served with kubaneh bread for dipping. A similar soup called tarato(r) served cold is favored by Jewish cooks in Bulgaria. They mix yogurt with water, salt, olive oil, vinegar, and cucumbers and often top it with chopped nuts. It can be traced to the Sephardic Jews who were expelled from Spain and Portugal in the 15th century.

The Nash Didan, a small group of Jews who live in the Levant regions of Iran, Turkey, and Kazakhstan covet their Sephardic cooking style. They use yogurt as a silky sauce to mix with pasta in a dish called chatachtuma, served over dolma (stuffed grape leaves), or in ayran — a refreshing drink of yogurt mixed with water and salt.

Possibly the most famous use of yogurt in Jewish Middle Eastern households would be the preparation of labneh. Think Greek yogurt on steroids, incredibly thick and almost cheese like. The whey is drained for more than a day as it takes on the texture and appearance of a mozzarella ball. It is seasoned with everything from sesame seeds to za’atar or just a squeeze of lemon and olive oil.

Yogurt plays nicely with many ingredients associated with Middle Eastern Jewish cooking, such as eggplant and mint, but none may be more popular than cucumber. Whether it’s called tzatziki, a Greek version featuring strained cucumbers and garlic or mast-o-khiar a Persian yogurt dip, it is a ubiquitous offering on most Israeli meze plates, finding its place alongside Israeli salad and hummus.

For Jewish cooks, yogurt should be in their daily arsenal. It is an economical, easy and nutritious way to honor a culinary tradition that has been part of our heritage for centuries. 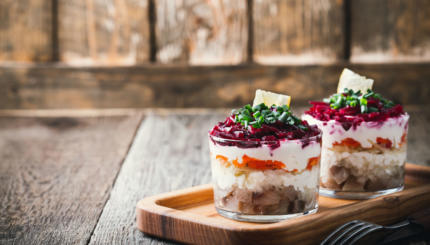 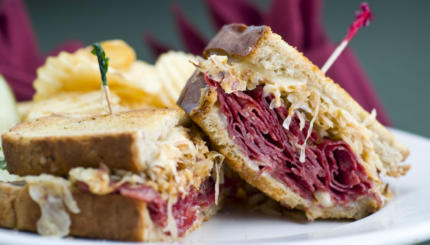 Delicious sandwiches and fare wages come together at this Denver eatery. 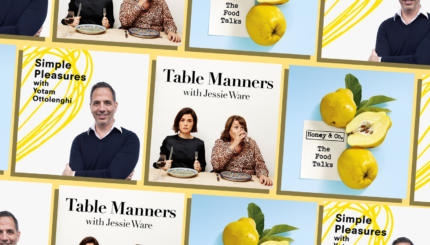 Love Jewish Food? These 3 British Podcasts Are For You