Non-dairy ice cream. Oxymoron? Perhaps. But for those who keep kosher and want to enjoy a creamy treat after a meat meal or who are lactose-intolerant, it’s a real challenge.

The market for nondairy ice cream has come a long way. We remember the days when the only nondairy ice cream available was vanilla Tofutti. Not that there’s anything wrong with that – in fact, it was one of our top picks. But there is a decent variety of nondairy ice creams ranging in creaminess, flavor combinations and quality; some made with almond milk, some with soy and others with coconut milk. We also hear that Ben & Jerry’s is even working on a vegan ice cream!

We wanted to test the wide world of nondairy ice creams and see how they stacked up. It was a daunting challenge, but we faced it head on, mouths open, spoons at the ready. This taste test was conducted by the staff of 70 Faces Media and each type of ice cream received a rating from 1-5 based on the following scale:

5. Great! I would definitely buy this.

4. Good. I enjoyed it but am not bowled over.

The hands-down top choice for creaminess was the Trader Joe’s cherry chocolate chip flavor, which multiple staff members said they would happily buy and keep eating by choice, not only by necessity. Another staff member commented she doesn’t even like cherry, but liked this flavor.

Also rated highly for its creaminess factor. One staff member commented “it screams to be made into an ice cream sandwich.” Another staffer praised its vanilla-ness.

The tried-and-true flavor that started it all earns high marks for creaminess, though lacked a little in the vanilla category. Nevertheless, it is a go-to for a reason and would go nicely in between two nondairy chocolate chunk cranberry cookies.

The So Delicious vanilla made with coconut milk mostly received largely positive comments, but had perhaps too much of a coconut flavor for some people. If you don’t like the taste of coconut this flavor is likely not for you.

The combination of the peanut butter, banana and chocolate swirl in this ice cream was perhaps better than the actual quality of the base ice cream, which was a bit icy. That being said, ten points for a great flavor combination which still earned decent ratings and one of our staffers said she could eat the whole pint! We would recommend trying this one out for yourself.

Some people really liked the coconut flavor and texture, but others felt the coconut flavor was too overwhelming and didn’t enjoy the chewiness of real pieces of coconut in the mix. Another staffer felt that, given the choice, she would rather just eat coconut sorbet. That being said, if you love the taste of coconut you will want to test this one out.

The flavors of Arctic Zero sounded much more appealing on the shelves than they tasted on spoons. Our staff generally thought this brand tasted icy and had a bit of a fake flavor to it. “The flavor is bad and the after-taste is worse,” shared one staffer. The texture of the ice cream was anything but creamy. One staffer questioned, “Is this real food? How can it only be 35 calories? Yet it is oddly addictive.” We would largely say to pass on this brand. 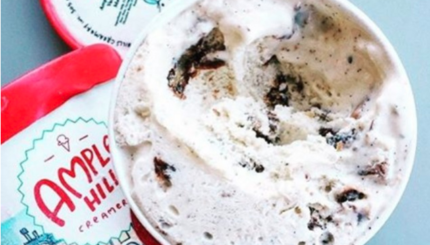 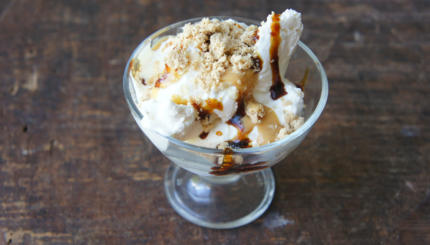 I’m always looking for the simplest route to a pareve dessert and last week I had a moment of inspiration ...