We could all use a little comfort food right now. And while my regular meal of choice when it comes to eating my feelings is a giant piece of layer cake (crowned with a softball scoop of ice cream for good measure), right now I am craving a big pot of cholent. No bowl required, thank you. Just me, the pot, the spoon, and the season finale of Unorthodox.

For those unfamiliar with cholent, get ready to drool as you read about its gastronomic origins and delectable regional and religious variations.

In the case of cholent, necessity was the mother, or rather bubbe, of invention, for this unctuous stew came into being as the ultimate edible workaround to Jewish laws prohibiting cooking on the Sabbath. Traditionally prepared on Friday afternoon and then left to simmer overnight on a hotplate or slow-cooker, cholent is a supper and lunch staple for Orthodox Jews committed to properly observing the Sabbath and providing a hot lunch or supper to hungry family members.

When it comes to what’s in a name, there’s some debate. For years, most have considered [cholent] to be a compound word coming from the French chaud (“hot) and lent (“slow”) or of chaudes lentes (“hot lentils”). Competing with this definition is also the theory that cholent is Hebraic in origin, coming from she-lan (“that rested [overnight]”) and referring to the practice of Jews keeping familial pots of cholent in their town’s baker’s ovens to cook.

In recent years, however, scholars have offered more nuanced explanations, most notably Max Weinrich, who in his landmark History of the Yiddish Language argues that cholent is derived from the Latin present participle calentem (“that which is hot”) from the Old French chalant, present participle of chalt, from the verb “to warm”, chaloir.

Cholent’s disputed etymological history aptly reflects the multiplicity of its manifestations. If you’ve had one cholent, you definitely haven’t had them all. Cholent can be generally classified by whether it developed via Sephardi or Ashkenazi schools of cookery, though significant variations exist within those groupings. 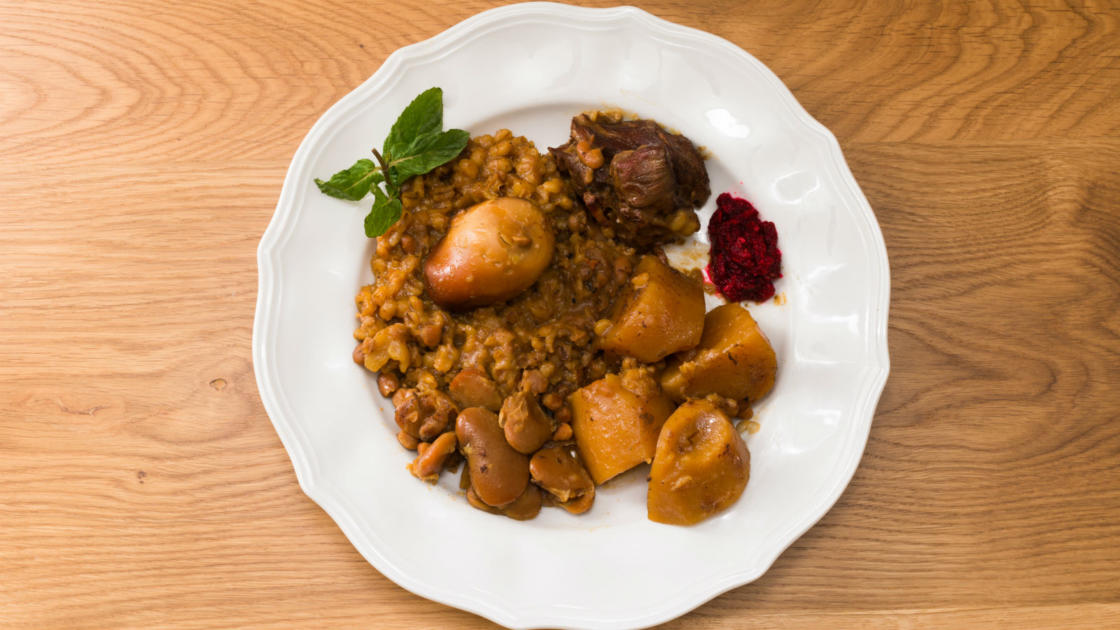 Known as chamin or hamin among Sephardi Jews, this form of Shabbat stew is made with chicken and often chickpeas. Two hallmarks, distinctive components of Sephardi cholent are whole vegetables (eggplant, green peppers, tomatoes, and zucchini) stuffed with rice and whole eggs cooked in their shells. Chamin is also often spiced with cumin or hot peppers. Such innovations make for a thicker, toothsome dish with levels of earthy heat.

Other iterations of cholent linked to Sephardi culinary tradition include dafina or adafina (from Arabic t’fina, “buried”), which today is most commonly found in North Africa. Dafina frequently contains potatoes and brisket as its respective featured starch and protein as well as saffron or turmeric, which gives it a dusky orange hue.

While all cholents involve some combination of chicken, beef, eggs, grains/potatoes, or vegetables, some versions showcase less traditional ingredients like veal, turkey, or even hot dogs. There are also vegetarian versions of cholent chock full of veggies, beans and other plant-based protein. And chefs have even created more upscale interpretation of the beloved comfort food, like Chef Yehuda Sichel’s cholent pot pie.

Ready to dig into a hearty bowl? Here’s a rundown of some recipes you can try:

Navigating a butcher shop can be super intimidating, even for an experienced home cook. And it doesn’t help that the ...