One food you’ve probably heard of, but haven’t ventured to cook is kishke. It’s a sausage-like dish that appears buried deep in some Jewish deli menus in New York (like Katz’s) and although it’s definitely a less-kvelled (to burst with pride) – about Jewish food, it’s worth a try.

Kishke comes from the Yiddish word for intestine (kishke) which is almost identical to the Polish word for the same thing, kishka. Ashkenazi (Eastern European) Jews made kishke with a grain, chicken or beef fat, onions, celery, and carrots.

Essentially, kishke is somewhat like paprika-spiced Thanksgiving stuffing packed inside of cow intestine, or more often today, in synthetic inedible casing. It can be made vegetarian, loaded with root vegetables and grains, or it can be made with schmaltz (chicken fat), matzah meal and vegetables. When cooked, kishke is soft and savory, often simmered whole inside of cholent or baked in the oven.

Michael Ruhlman, author of The Book of Schmaltz: Love Song to a Forgotten Fat, poaches kishke in chicken broth, either on the stovetop or in a casserole dish in the oven.

You can find kishke in kosher delicatessens and butchers, or you can try to make your own with one of our recipes below:

Weekday dinnertime, sigh. You’re tired, you’re hungry and you just want to sit down with a glass of wine and ... 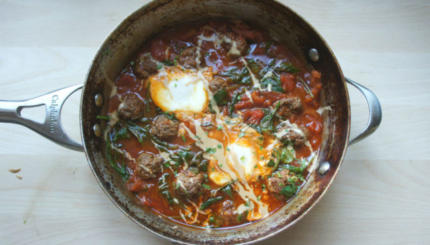 Classic shakshuka gets a dose of spiced lamb meatballs and fresh spinach for a one-pot wonder meal. 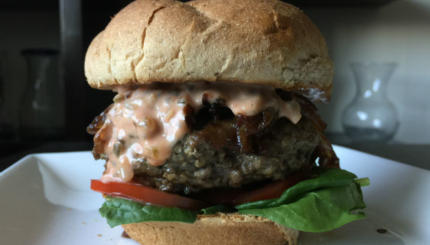 The hamburger, and definitely the cheeseburger, is arguably the most iconic American food. You would be hard pressed to find ...