While the Bay Area has long been known for its robust farmers markets and influential restaurants, only recently has that zeitgeist been expressed through Jewish food. Bay Area chefs and entrepreneurs are communicating their Jewish identities through cooking. The result: quality bagels, sustainably-minded delis, award-winning kosher wines, and Jew-ish fine dining. There’s even a not-so-secret secret networking organization of Jewish food professionals, The Illuminoshi, which gets together for special events, occasionally opening up to the public.

And while it may once have been a joke that there are no good bagels in the Bay Area, now you can find ambitious bagel bakeries everywhere you turn, one of which is even making its own cultured cream cheese from a local dairy. In the East Bay you’ll find a Jewish farm-cum-community center right beside an award-winning kosher urban winery. In the heart of San Francisco proper, you can dig into freshly baked bourekas in the Iraqi Jewish tradition. As the diverse array of Jewish food experiences suggests, the Bay Area has a fascinating Jewish culinary landscape ripe for exploration. 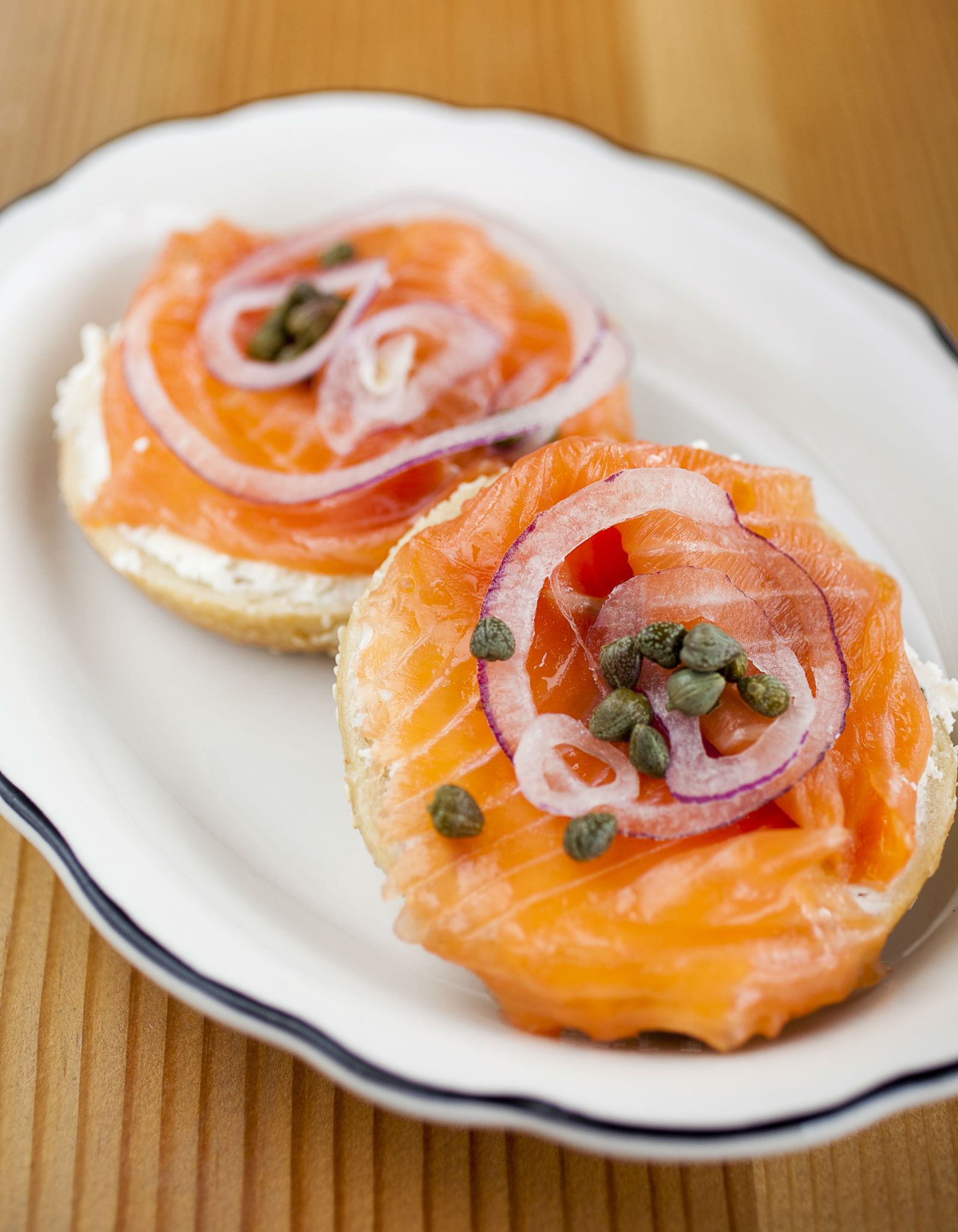 East Coast transplants in the Bay Area used to complain about the lack of good bagels, though several young entrepreneurs have put an end to that chatter. Beauty’s (named for the famed Montreal luncheonette) is hand-rolling and wood-firing Montreal-inspired bagels in Oakland. Boichik Bagels began as a wildly successful pop up re-creating the classic New York bagel and is now opening a shop in Berkeley in the original Noah’s Bagel location (the OG Bay Area bagelry). Wise Sons Jewish Delicatessen has opened their own bagel shop in San Francisco proper, ensuring that good bagels don’t only reside in the East Bay. Daily Driver, a bagel shop, coffee roastery, and the first urban creamery in San Francisco, opens soon with a focus on handcrafted cultured cream cheeses and locally sourced ingredients. Considering this wave of new bagels, San Francisco could soon be a North American bagel capital.

Pro-tip: Don’t miss Bagel Baron which supplies delis, restaurants, Whole Foods and other specialty stores in the area with their bagels but also sells directly to customers. Minimum order (through the website) is 1 dozen hot and fresh NY style bagels. 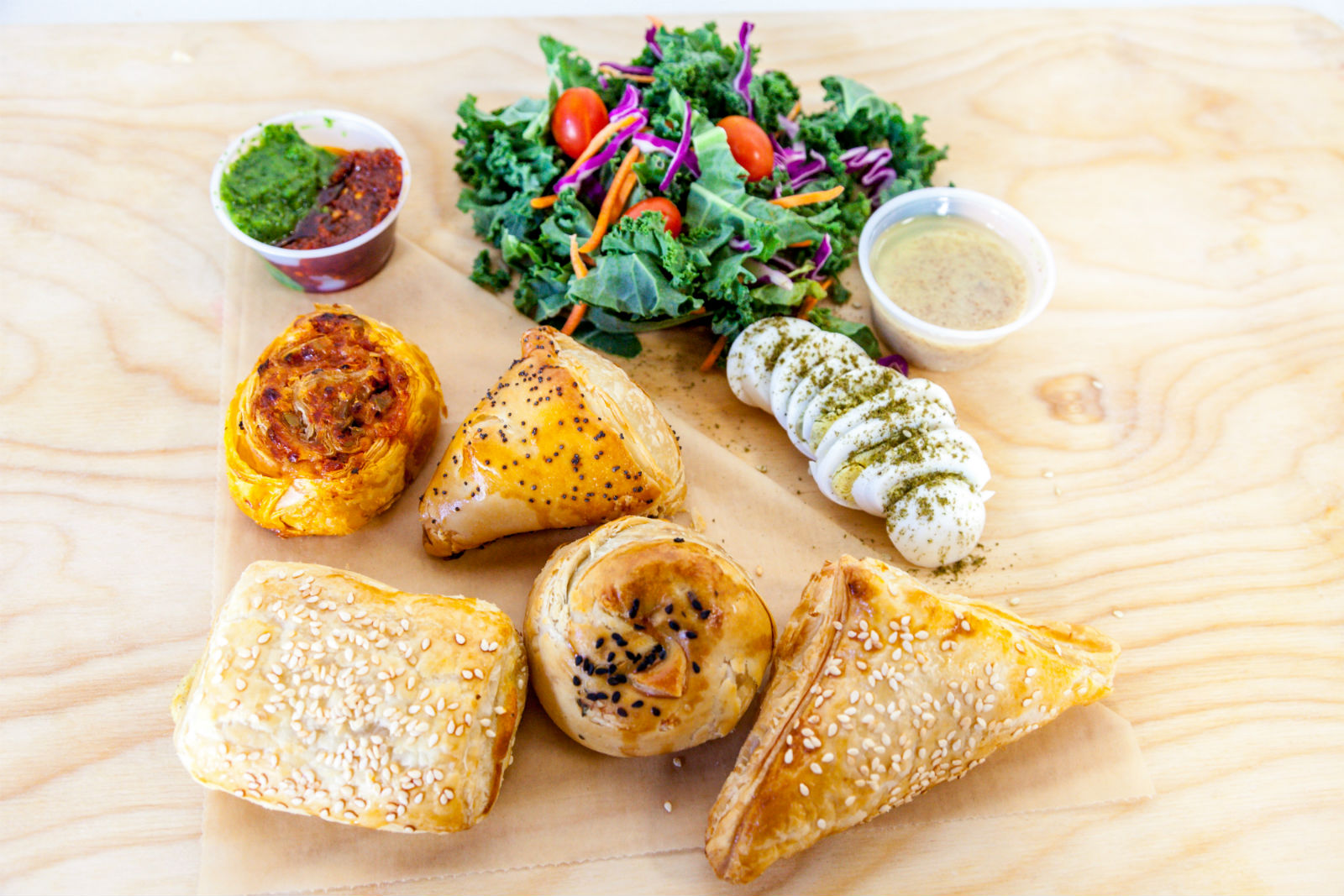 First stop for Jewish baked goods is Frena Bakery, featuring recipes passed down from four generations of Iraqi Jewish bakers. Frena opened in late 2016 and is the only kosher bakery in San Francisco proper. Try their infinite boureka selection or their vegan sufganiyot (jelly donuts). Frena is set to open a second location in the Richmond District of SF in 2019. Then check out Vital Vittles organic breads. You can stop by their Berkeley commissary kitchen or find their loaves at stores and markets across the Bay Area. These kosher-certified breads have been baked with love and care since 1976, and their Jewish specialties include honey challah, Russian rye, and sesame millet loaves. Semifreddis, another kosher bakery that’s been around for decades, makes challah hot dog buns, Odessa-style rye bread, and other fun seasonal specials. A much-beloved old-school Oakland Jewish Bakery, Grand Bakery (in operation since 1959) has reopened in a new location at The Food Mill Market deep in Oakland. Get their classic challah, Russian tea cookies and macaroons at the new storefront or in stores around the Bay Area. And then there’s newcomer Ayelet Babka Bakery in Palo Alto. The first bakery in the country to be dedicated purely to the art of babka, including sweet and savory varieties like maple pecan and tomato mozzarella. 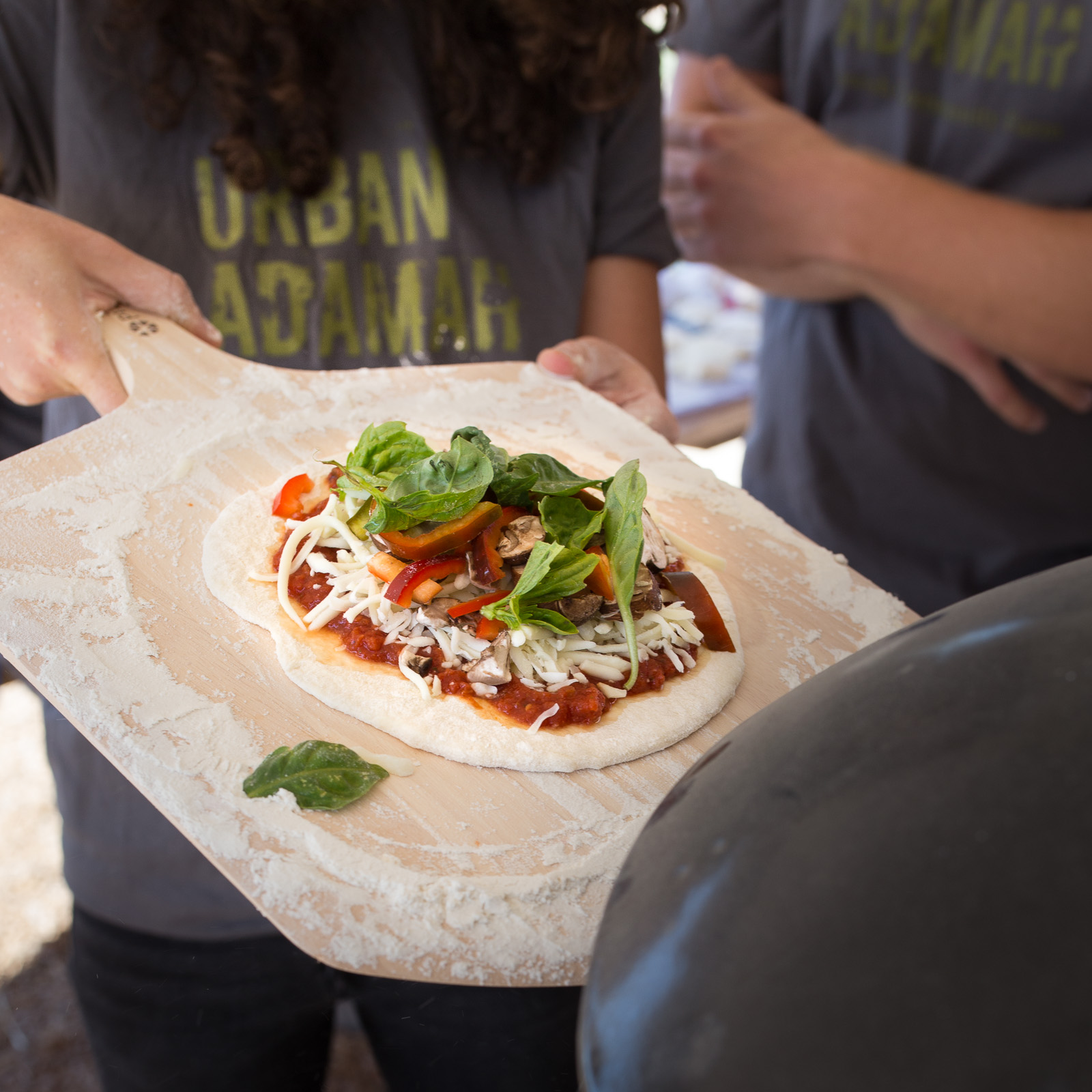 Located in Berkeley, right across from Covenant Winery in the Berkeley Drinks District, Urban Adamah began in 2010 as an organic farming fellowship. The organization moved to a new, expanded space, quickly becoming the center of a burgeoning alternative Jewish community. Hosting tons of public programs, some centered around food, Urban Adamah now offers culinary programs in its industrial community kitchen, as well as interactive Jewish holiday celebrations, like Tu Bishvat seders and monthly Friday night services followed by a community-wide vegetarian potluck dinner. Every Tuesday from 2:00 – 5:00 p.m., guests are invited to volunteer on the farm by rolling up their sleeves and laying mulch, cover-cropping, or seeding in the greenhouse. Urban Adamah will also be launching a free farm stand for community members in need at the start of 2019. If you’re in the area, check out their calendar of events and stop by. 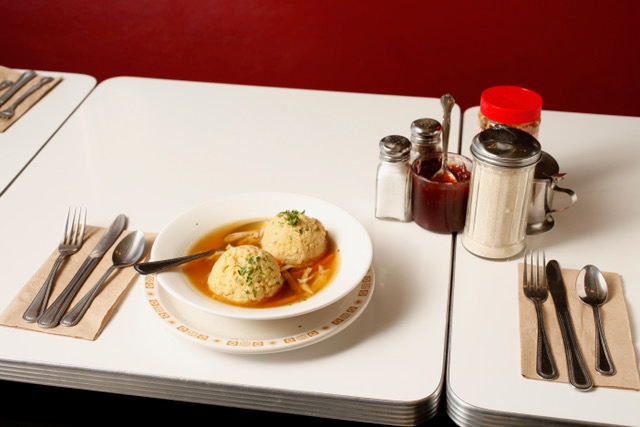 Saul’s has been a local favorite for East Bay residents since the 1980s. In 2010, Saul’s rose as a leader in the national deli scene by holding its Referendum on the Jewish Deli Menu, a public conversation about making the deli more sustainable and seasonal. Owners Peter Levitt and Karen Adelman had been working artisanal flare and environmental concerns onto their menu for some time, but the Referendum put them on the map as leaders. Order the classics, like a pastrami sandwich or matzah ball soup, or pick up something a little different, like a cabbage and kasha knish or Turkish-style fermented pickles. You can also find a roster of exciting evening events. 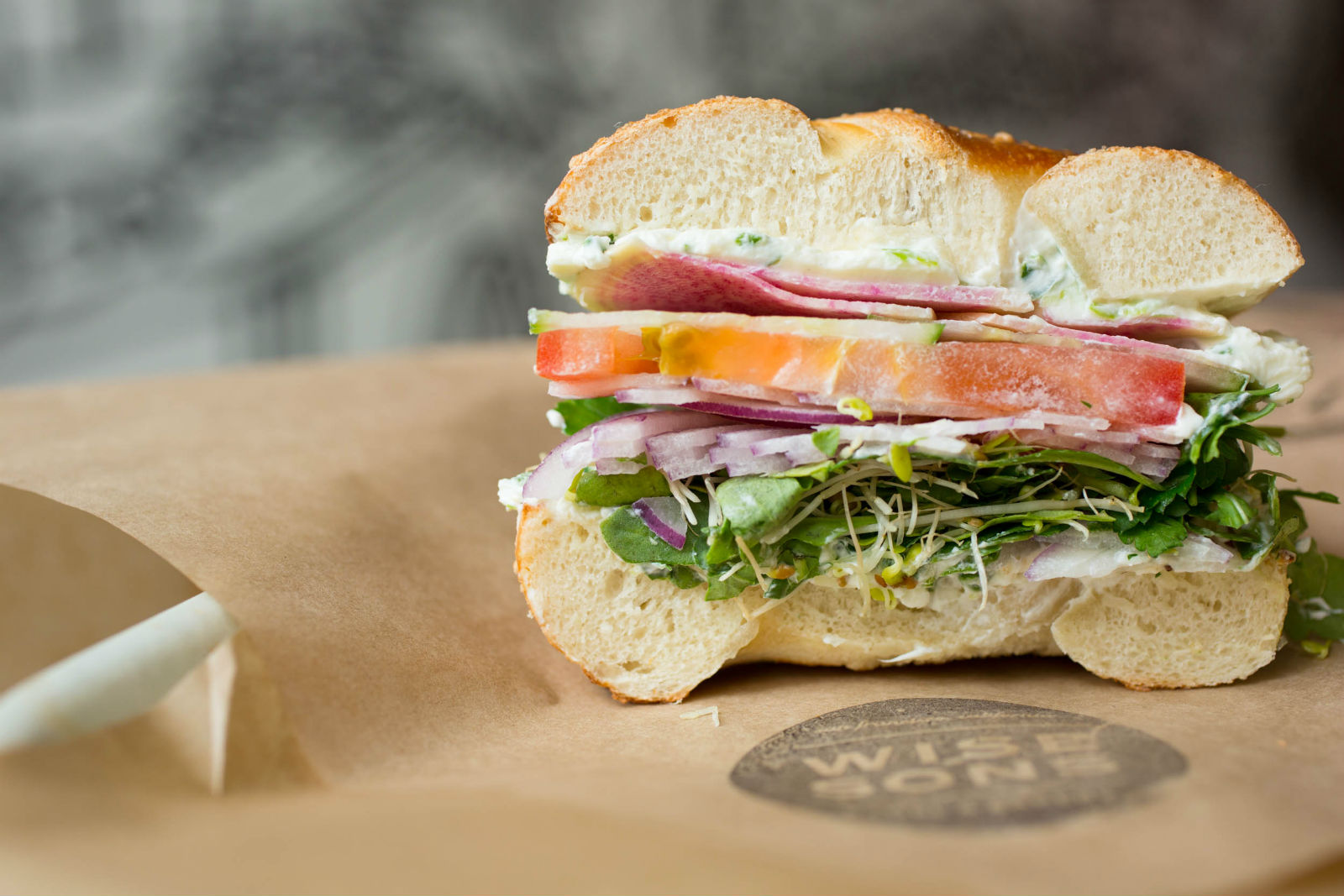 In 2010, millennials Evan Bloom, Ari Bloom, and Leo Beckerman launched Wise Sons. What began as a pop-up brunch series has since grown into a San Francisco deli empire. Wise Sons boasts three deli locations (including one in the Contemporary Jewish Museum), a bagelry and bakery, as well as outposts at multiple farmers markets. For breakfast, try the popular Semite sandwich, featuring crispy pastrami and melted swiss, topped with an egg, served on rye, and cooked on the griddle, or the L.E.O. (lox, eggs, and onions) served with a housemade bialy. If you’re visiting for lunch, order the soup and half sandwich combo, because nothing warms up a foggy San Francisco day like a bowl of matzah ball soup. And as innovators in the new deli space, Wise Sons was among the first to make babka french toast a thing. 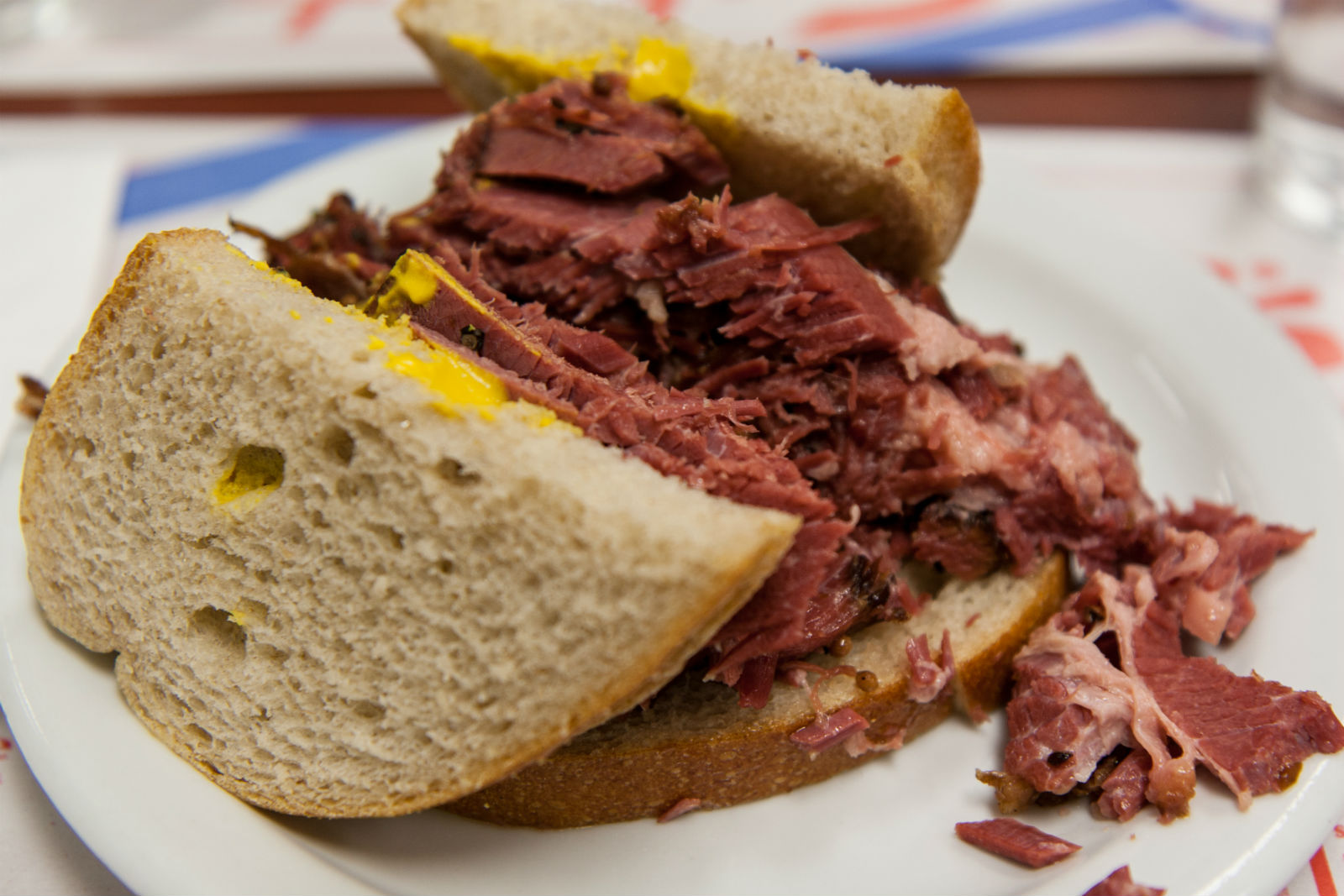 It’s an age-old story: You move away, you miss the comforts and the foods, then you recreate those flavors, and soon you’re opening up an outpost to bring flavors of your old home to your adopted home. So it was with native Montrealer turned San Franciscan Lex Gopnik-Lewinski. After years of schlepping Montreal smoked meat back to SF with him, he decided to finally make his own. Following a pop up series at Beauty’s Bagels in Oakland, Lex partnered with chef and “Mad Food Scientist” Mike C to open up Augie’s Montreal Deli in Berkeley in 2018. Try a smoked meat sandwich and a side of vegetarian poutine, or dig into the rye bread latkes. 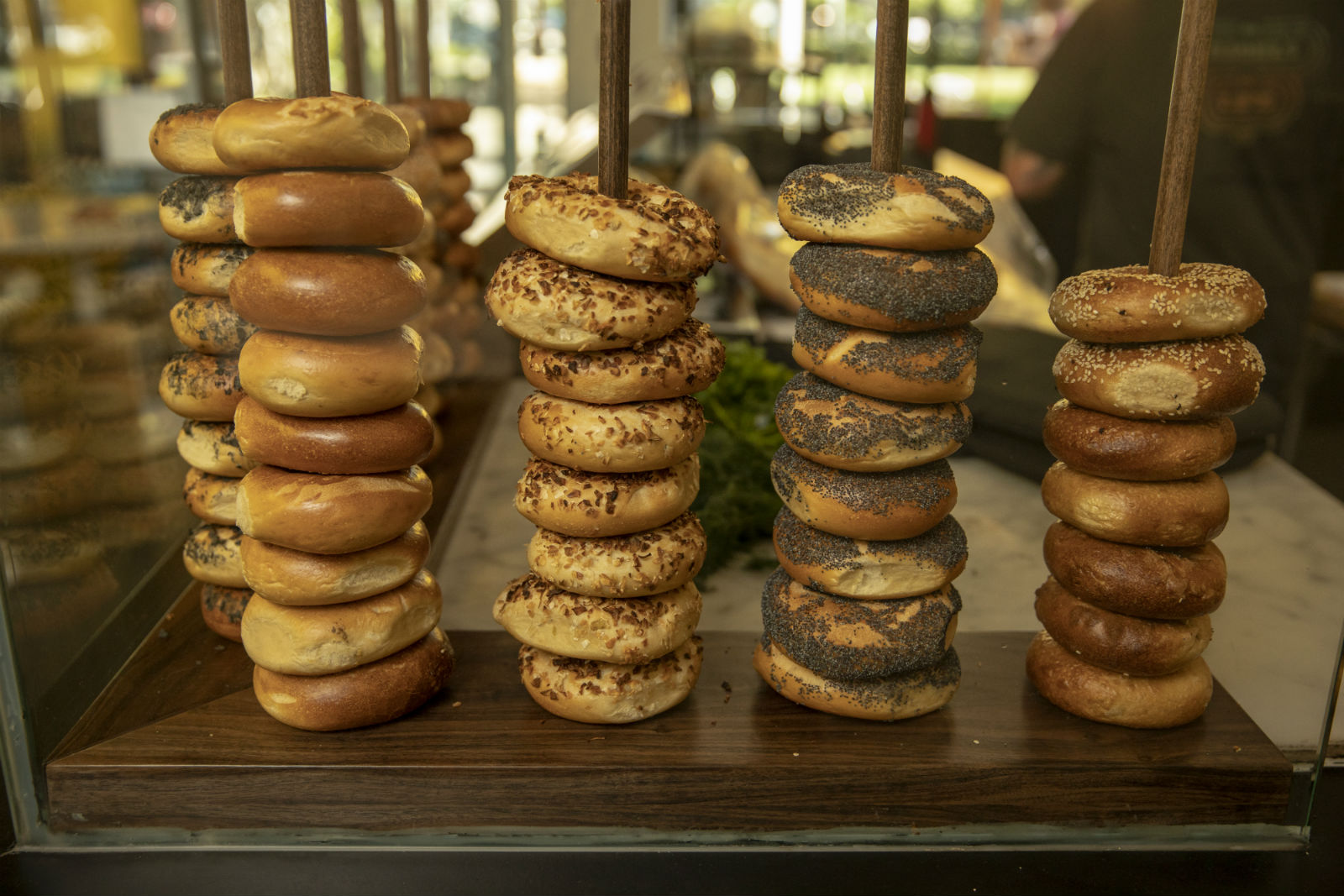 Solomon’s Deli’s menu is exciting, innovative, youthful, vegetarian, and vegan-friendly. Their slogan, “No Bagels, No Life,” tells you everything you really need to know about the vibe. Try the Russ, their house-smoked, sustainably sourced nova lox on a black lava salt bagel, or the Abe: a beet pastrami reuben on rye. The team will open a second (and bigger) location in downtown Sacramento in 2019, which will be a welcome addition to that deli desert. 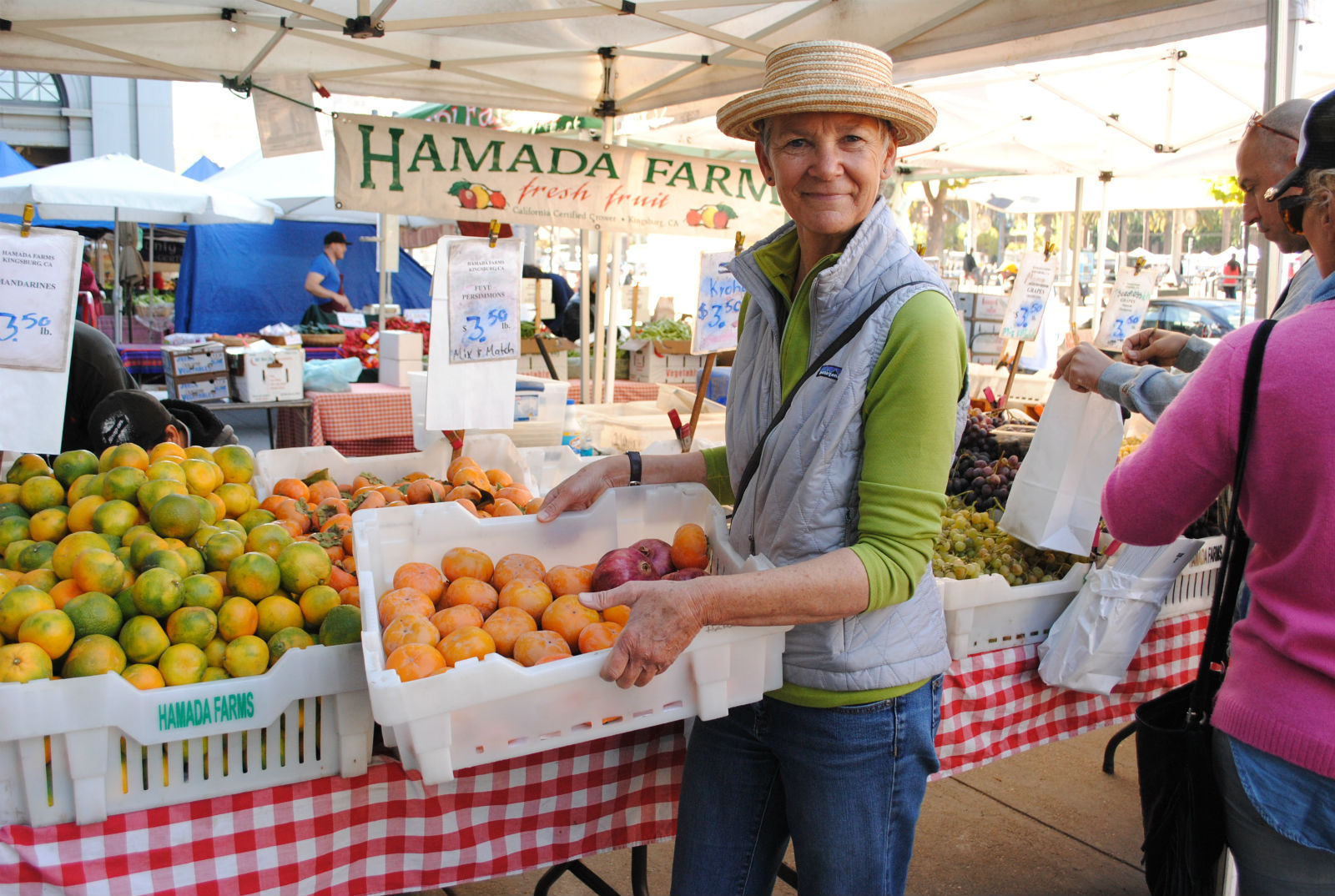 No trip to San Francisco is complete without a visit to the Ferry Building, where you can also find some “hidden” Jewish gems. Best time to go is Tuesdays, Thursdays, or Saturdays, 8:00 a.m. to 2:00 p.m., when the farmers market is up and running. Pick up seasonal produce for cooking a great meal and drop by the King Knish stall (Tuesdays and Saturdays) to find Chef Ramni Levi dishing out puff pastry stuffed with creative combinations like potato wasabi. Wise Sons has a stall on Saturdays, too, where they serve hot pastrami sandwiches and a variety of bagels and sweets. At Book Passage, browse through your fave Jewish cookbooks and then stop by a cooking demo at CUESA’s outdoor demo kitchen, where Jewish cooks are regularly featured. Demos are free of charge, tastings included. For a more comprehensive visit, you can book a tour of the market with Illuminoshi member-owned Edible Excursions. 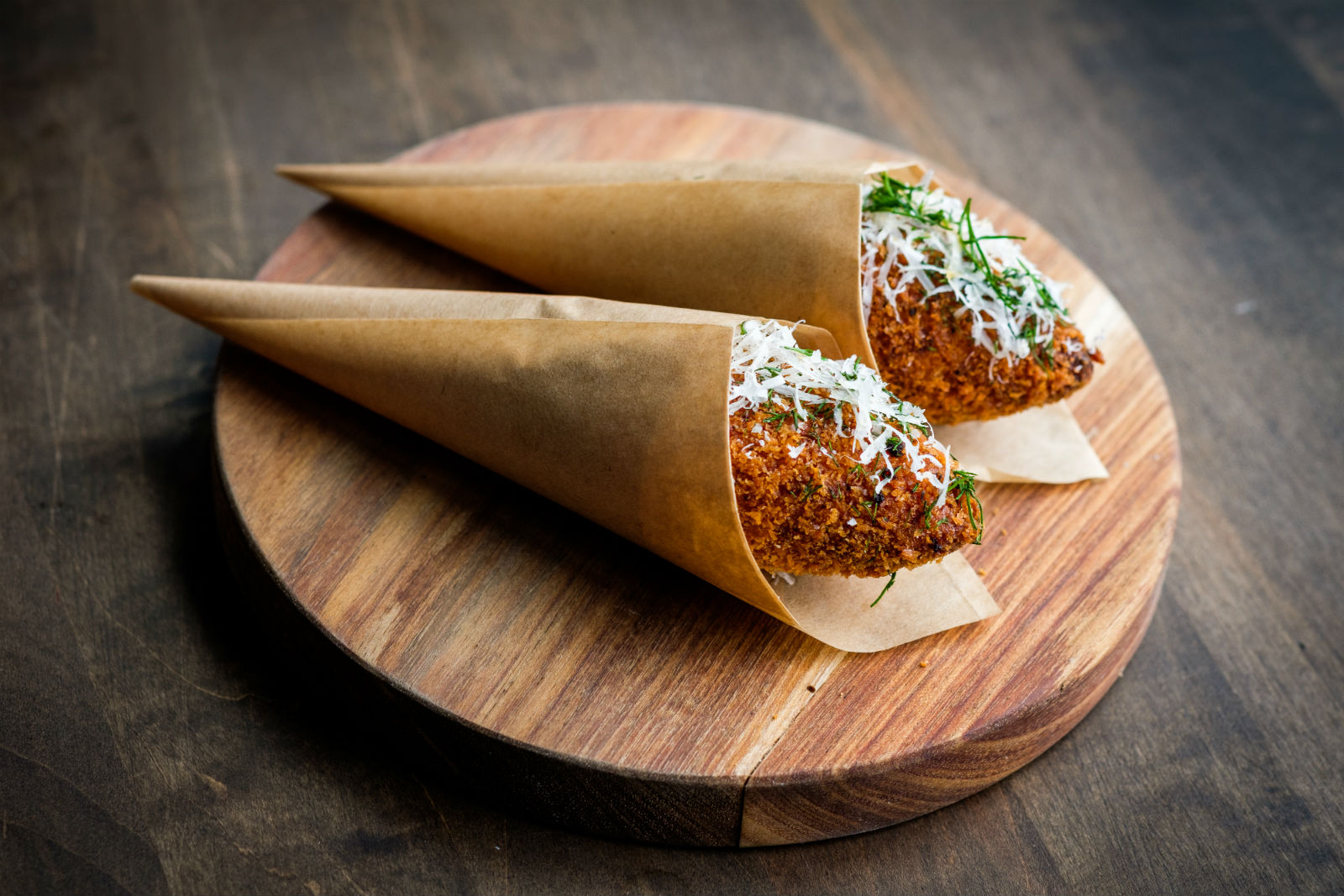 Plan ahead and make a reservation if you want to dine at Che Fico (“kay fee-koh,” slang for “so cool!” in Italian). Chef David Nayfeld opened this Italian fine dining restaurant to rave reviews and months-long waiting lists. The son of Jewish Soviet immigrants, Nayfeld has created a robust Italian fine dining experience with Jewish accents, including a special cucina ebraica (Italian Jewish) menu. Try the suppli, a fried rice ball with tomato and provolone, or the duck liver served with Roman matzah. 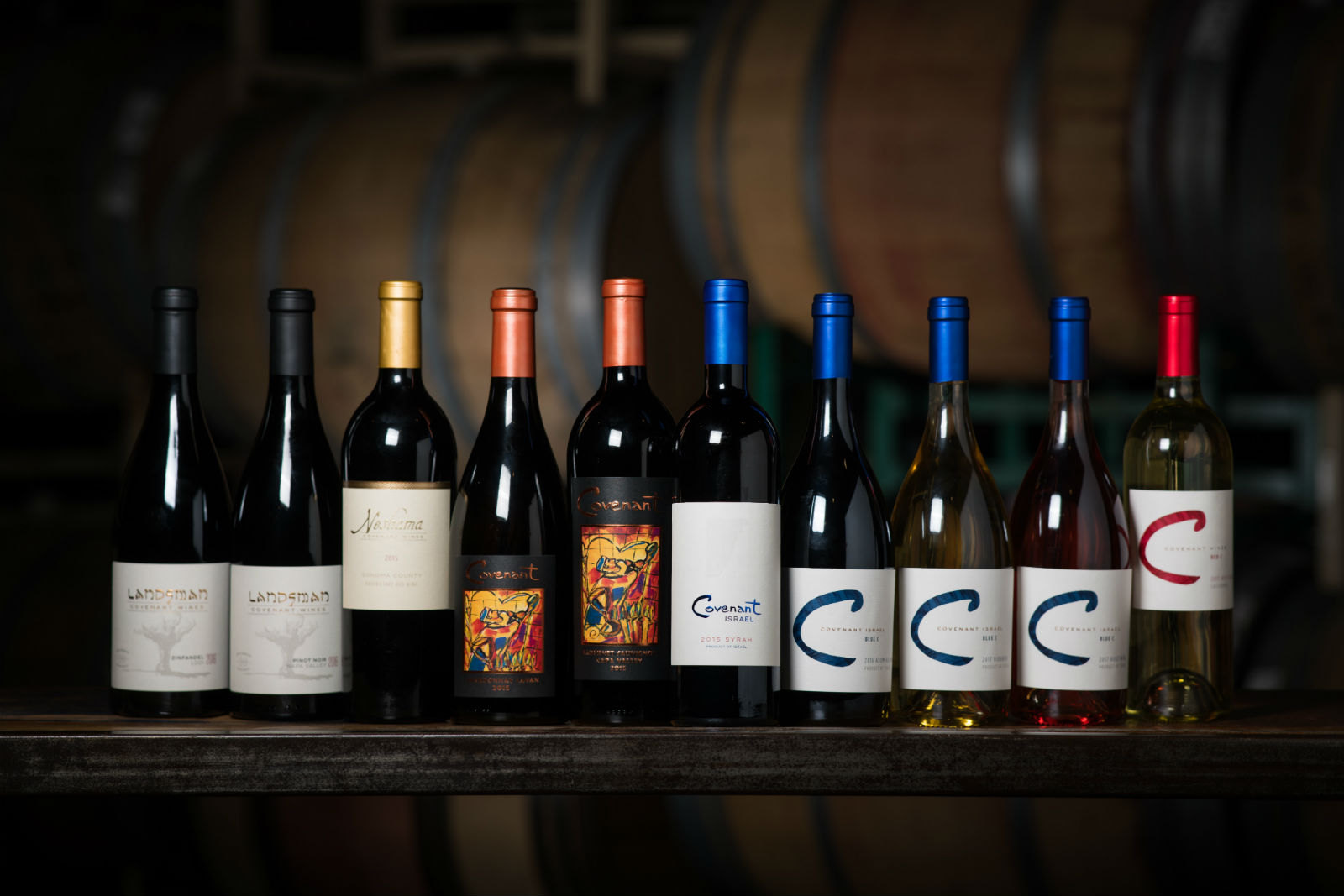 Napa Valley, due north of San Francisco and the East Bay, is overflowing with exciting wineries, including kosher wineries. One highlight is Hagafen Cellars, which opened its kosher winery in 1979 and serves up award-winning wines in a lush setting. If it’s a beautiful day, take a tour of the estate. And if you’re looking for a wine tasting right in the East Bay, visit Covenant Winery in the “Berkeley Drinks District.” Covenant launched in Napa in 2002, setting a new standard for kosher wine. But in 2014, they moved operations to Berkeley, right across from Urban Adamah. You can set up an official tour of its 7,000 square foot winery and arrange a tasting of all its varieties, fermented with native yeast. Also check out some of Covenant’s special events throughout the year that feature food and wine pairings. 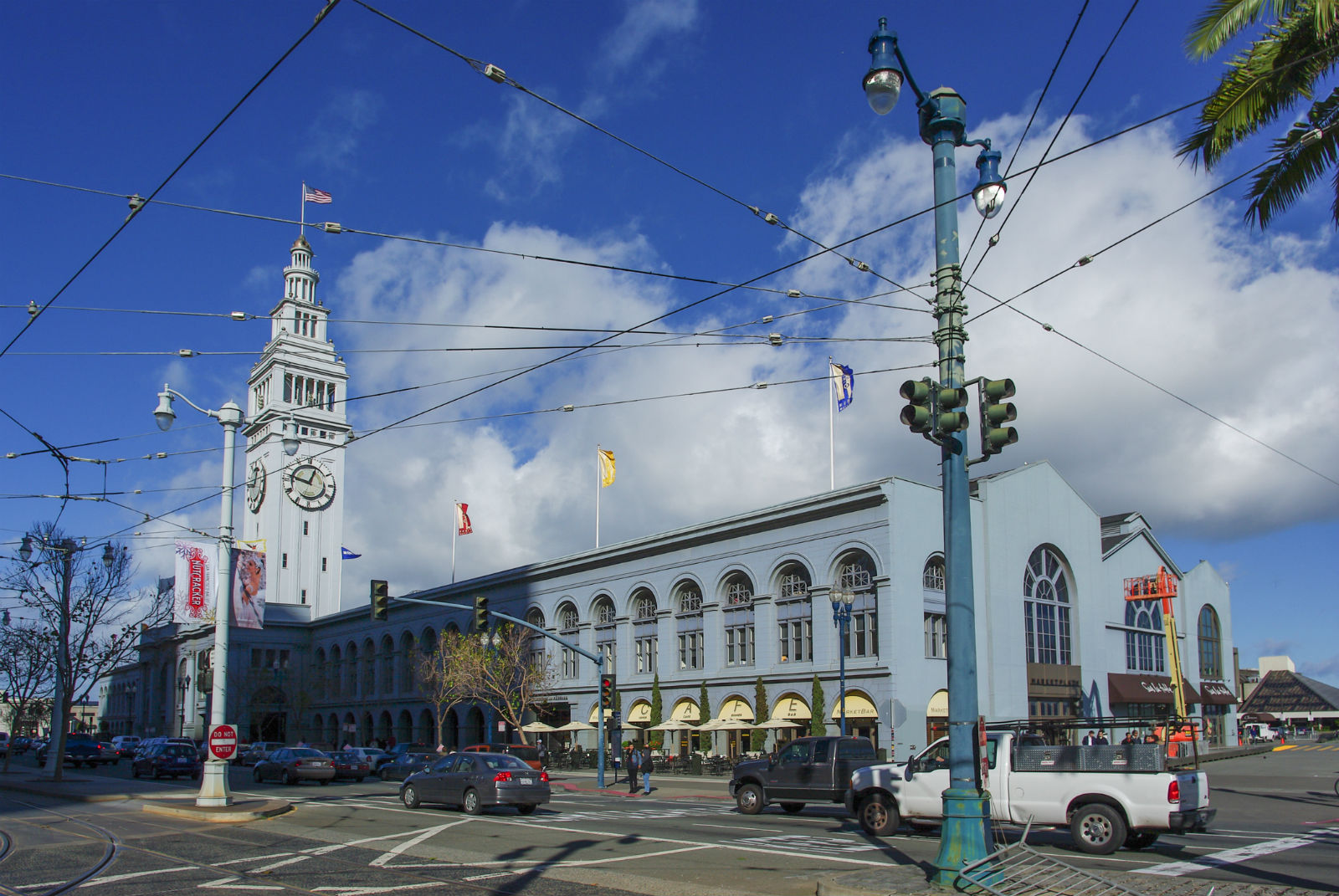