Schmaltz is having a moment, and this quarantine can’t stop it. The Ashkenazi Jewish staple, which literally means rendered poultry fat in Yiddish, was punching above its weight in terms of cultural cachet pre-pandemic. Most of this is due to a mini-food trend of high end, Jewish inspired restaurants like Freedman’s in Echo Park, Los Angeles, which offered steak frites with fries cooked in chicken fat and matzah ball soup with “schmaltzy carrots,” and Santa Monica’s Birdie G’s, which offered the Hangtown Brei, an epic mash-up matzah brei cooked in schmaltz and topped with pork belly and two fried oysters.

But schmaltz also made it out of the Jewish sphere in the pre-COVID food scene. It was spotted on the menu of Kismet Rotisserie, the casual to-go offshoot of Silver Lake’s critically acclaimed, Mediterranean-ish Kismet. Meanwhile, New York Times food critic Pete Wells criticized the new, much-publicized West Village restaurant Anton’s schmaltz potatoes for not tasting “like much of anything, not even schmaltz.” (But he loved the anchovy pasta.)

A lot of the schmaltz hype can probably be credited to Alison Roman, who (according to Instagram lore) inspired a pre-coronavirus run on shallots with her photogenic and delicious caramelized shallot pasta and elevated pantry recipes forever with #thestew. In a 2018 New York Times article, Roman called schmaltz “liquid gold” and declared that it is her “favorite.” Samin Nosrat, celebrity chef and everyone’s imaginary best friend, also lauded the merits of using chicken fat in her seminal book, Salt, Fat, Acid, Heat, where she wrote about frying rice in schmaltz because of the “chickeny flavor.”

Our matzo ball soup is now available to-go at noon everyday! You can also get a family style size with 4 balls and a quart of really good chicken broth. #jewishpenicillin 📸 @jimsullivan_

Then, like the rest of us, schmaltz was stopped in its tracks. Because of the quarantine, it won’t be sizzling potatoes or slathering carrots in coastal fine dining establishments any time soon. Schmaltz, which was just beginning to taste the limelight, was sent back to where it started: the home kitchen.

Schmaltz was created by Jewish home cooks who needed to keep kosher with limited resources. For the Jews of Eastern Europe in past centuries, olive oil was prohibitively expensive, butter couldn’t be used with meat, and pork fat was not kosher, so chicken fat became the cooking fat of choice. The Jewish diaspora in America, like my grandparents, continued to use schmaltz at home, maintaining a mason jar filled with yellow, cloudy chicken skin drippings in their fridges.

Schmaltz has a mild chicken flavor when cooked and a similar smoke point to olive oil. It can be used for roasting, sautéing, or, if you are super hardcore, you can do as my grandparents did and simply spread it on toast, although I am not personally there yet in my schmaltz journey. It is solid when cold but melts quickly in the pan. It has a unique smell: a mixture of chicken, sweet onion, and a rich, nutty base. You can make your own by cooking down chicken fat and skins and preserving the fat from the pan. This will also produce gribenes, which are crispy chicken skins used for snacking. Personally, I buy mine, which is not very old world but a lot easier, especially for someone who is just relearning the magical ways of schmaltz. There are several brands of schmaltz, including the Whole30 approved Fatworks, which even includes an endorsement from wellness guru Melissa Urban.

Schmaltz may be quarantined, but it’s still thriving. In a post-dine-in world, Birdie G’s offers schmaltz as a larder item for $8 a pint. Alison Roman is still writing about schmaltz. In her massive Passover menu, which she rolled out for the New York Times before the holiday, she included a recipe for matzah balls using schmaltz that you can make at home. Schmaltz also serves as a recommended cooking oil for her potato kugel and garlicky carrots.

Personally, I am cooking with schmaltz for the first time ever. I have used it to make crispy diced potatoes with lemon; silky, savory pan-roasted carrots; and crisp, crunchy latkes. Buying and cooking with schmaltz has reconnected me to a Jewish cooking tradition that I might otherwise have ignored. As a child, I thought schmaltz was disgusting. The sight of it in my grandmother’s fridge would literally send a chill down my spine. The hairs on my arms would stand up when I considered putting the grainy-looking goo into my mouth. If it wasn’t for schmaltz’s recent rise in notoriety, I might have forgotten all about it. And if it weren’t for the quarantine, I definitely would not have a pint of it in my fridge right now.

That’s due in no small part to the Jewish chefs and restaurant owners who decided to use schmaltz — an unpopular and little known niche ingredient — and integrate it into their menus. Local restaurants work hard to bring new cultural experiences into our lives. They need our support now, as much as we possibly can, so the next forgotten ingredient can find its way back into our home kitchens.

Inspired to cook with schmaltz? Here are some more recipes ideas for using schmaltz. 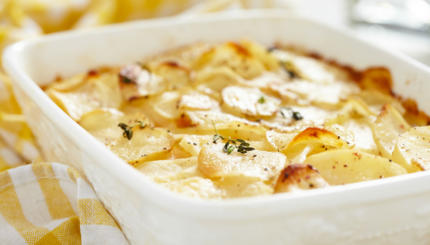 Why Schmaltz Is Your Secret Weapon for the Best Thanksgiving Sides

Who needs butter for mashed potatoes when you can use chicken fat? 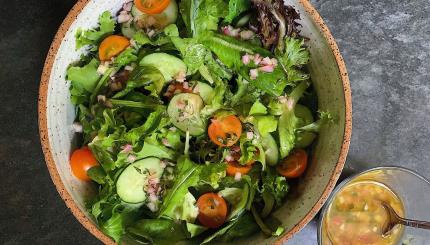 Schmaltz Is the Secret Ingredient You Need For Your Salad

Add schmaltz to your vinaigrette for a rich, silky dressing.

Shabbat is here, and time to plan your meals! While some of you might be trying to lighten your cooking ...