When you hear the term “fusion cuisine,” you might imagine Korean tacos or sushi burritos, but rarely do you find the flavors of Jewish and African foods together on one plate. Think cowpea falafel, doro wat roast turkey on challah, and peri-peri grilled chicken with jollof couscous. For these combos, you’ll have to journey to JewFro, a Jewish-African fusion restaurant located in Richmond, Virginia.

Serial entrepreneurs Ari Augenbaum, Trey Owens and Nar Hovnanian had been in business together for years before the idea to open a restaurant struck. Their first venture, Soul Taco — which marries soul food with Latin American flavors — opened Richmond in 2018. It was a quick success, and the trio opened their second location in 2019. In January, 2020, the restaurant appeared on an episode of popular Food Network show “Diners, Drive-Ins, and Dives.”

Amidst the constant pivoting that COVID-19 required of most restaurant owners, Augenbaum, Hovnanian and Owens began hosting a series of pop-ups that eventually evolved into the JewFro concept. As the Black Lives Matter movement blossomed in the summer of 2020 in the wake of the killing of George Floyd, the trio found themselves searching for ways to build community through food.

“People were shutting each other out and saying, ‘I’m not going to listen to you,’ but there are similarities between people that don’t come out unless they talk to each other,” Hovnanian explained. “Everyone can connect on something, and food is such a perfect way to connect.” Encouraged by Owens’ exploration of his African roots, the trio began examining the potential for combining African food and Jewish food.

For Owens, a native of Richmond’s historically Black Fulton Hill neighborhood, who has taken a leave of absence from the business following the death of his father and ongoing struggles with COVID-19, finding his precise cultural origins was not possible. His knowledge of his ancestry stops at the slave ships that came to America, so Owens approaches African cuisine and culture with the fascination of someone who “could be from anywhere.”

“There are 54 different African countries, each with their own unique culinary traditions,” says Augenbaum. “It’s similar to the array of Jewish food around the world. We were able to find similarities in the food, and we thought, ‘How cool would that be, to fuse that with the mindset that, while people are very different, once they come together, they’ll find something that connects them.’”

Augenbaum said they knew that they had struck on an idea whose time had come. Both avid researchers, Augenbaum and Owens poured themselves into developing the menu. They found a dearth of representation for food from African countries in the U.S., but their research led them to Michael Twitty, a Jewish-African food historian. His work, and the influence of Côte d’Ivoire-born chef Morou Outarra (for whom Augenbaum worked earlier in his career), provided a jumping off point for JewFro’s process of recipe development.

“When we started to put together the menu, we didn’t want to create dishes that were just a blend of ingredients,” says Augenbaum. Instead, they wanted to clearly define global Jewish cuisine and pan-African cuisine within each dish. “The most prominent example of that is the jollof couscous on our dinner menu,” Augenbaum explains. “It’s a classic Nigerian jollof rice and Israeli couscous. It’s our way of saying, ‘We can take these things and put them together without losing the history of the origin of what makes them special to begin with.”

Augenbaum, who calls himself ‘the Jew in JewFro,’ grew up in Silver Spring, Maryland in a kosher, Ashkenazi household, with childhood staples like borscht and fried flounder. Eventually, he lived in Israel and began learning more about Israeli and Sephardic cuisine from friends, giving him a broader perspective of global Jewish cuisine. “There are Jews everywhere in the world, and our cuisine has been influenced by wherever we are with whatever local ingredients are, whatever the local culture is.”

Hovnanian, who was raised by immigrants from Iraq and Jordan and is a descendant of Armenian genocide survivors, says that “food of persecution” is part of her heritage. “I grew up eating Middle Eastern food, so Israeli food feels very familiar,” says Hovnanian. “It’s great because I understand the flavors.”

The trio is bringing JewFro (and sister restaurant Soul Taco) to Raleigh, North Carolina later this year, and taking the message of connection with them. “Being able to have discussions freely without being canceled and shut down is what this brand is built on,” Augenbaum declares. “If you can’t approach the other side and hear where they’re coming from, then there’s no way to move forward. JewFro is all about finding common ground culinarily as well as intellectually.” 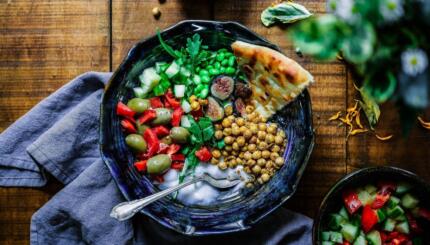 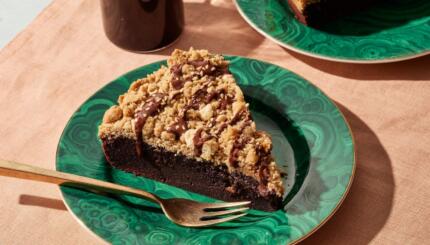 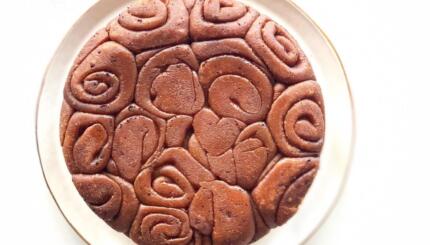