The first time I had a slice of kugel in New York, I was confused. My graduate school roommate had brought it home to our apartment along with some other leftovers from her family’s Rosh Hashanah meal, and I eagerly opened up the brick of tinfoil to find something that looked totally alien to me.

Reader, it wasn’t kugel. At least, it didn’t look anything like the kugel I grew up eating in the suburbs of Chicago. Sure, it consisted of noodles and cream cheese, but the top of the dish was made up of slightly burnt, hard noodles and was missing a very key ingredient: cornflakes.

Throughout my childhood, no Rosh Hashanah dinner was complete without my Nana’s kugel. The sweet noodle casserole featured curly egg noodles, cream cheese, crushed pineapple, and more sugar than you’d care to know. The very best part was the topping: toasted cornflakes sprinkled with cinnamon and (more) sugar. When eaten together — the warm, soft, creamy noodles with the crispy, crunchy, sweet cereal — it is a heavenly bite. The casserole dish usually didn’t make it to the table before my brothers, cousins, and I started reaching in to pluck out a cornflake and savor it like candy.

Classic Ashkenazi dishes are often known for being basically “brown mush” (looking at you, matzah balls), which is not necessarily a bad thing (still looking at you, matzah balls), but an easy way to make any dish more pleasurable is to get some contrasting textures going on. That was why I was so disappointed in that first bite of my roommate’s kugel. Beyond the slightly crispier top layer of noodles, which frankly just made them taste a bit stale, there was no textural variety. And without the added dash of cinnamon sugar on top, it all just tasted sort of bland.

Having lived in New York for 10 years now, I’ve come to expect a certain level of kugel disappointment. It seems nobody in this fine city has ever even heard of cornflake-topped kugel, and plenty balk at the very idea of it. People here have told me they’re not a fan of sweet noodle kugel in general because it’s too mushy, which, duh, is why you need cornflakes.

So, I set out to discover whether this was my family’s weird tradition or whether there are just certain parts of the country that aren’t hip to the cornflake trend.

First things first: I hit up Google. “Cornflake kugel” turns up plenty of recipes, including one from Kellogg’s themselves. Nosher contributor Ronnie Fein has one on her website that she dubs “The Kugel to End All Kugels,” and refers to her first taste as a “transforming moment.” So no, my family did not invent putting cornflakes on top of kugel. Good to know.

Next up: I called my Nana.

“I’ve got a question for you about kugel,” I said.

“I’m the kugel queen!” she exclaimed, which is emphatically true.

When I asked her where she got our beloved family recipe, she said it came from an old friend named Tillie she knew from Chicago. Though she’d made a few tweaks to it over the years, the original version definitely included cornflakes on top.

After informing my grandmother that I wouldn’t be coming home for the High Holidays this year and dealing with the subsequent guilt, I hung up and turned to my Jewish coworkers (I work for 70 Faces Media, the Jewish media organization that runs the Nosher, so pretty much all of my coworkers are Jewish). A poll on our office Slack revealed that nobody had ever eaten cornflake noodle kugel, but two people had heard of it: one who grew up in Ann Arbor, Michigan, and another who went to school in Indiana.

Aha! Michigan, Indiana, Illinois… could it be that cornflake kugel is a Midwestern thing? We are known for our special homey concoctions, after all.

With this theory in mind, I took my questions to the source of all lively debate: social media.

I asked the folks in the Facebook group “Love Jewish Food, Will Travel” whether they were familiar with the concept, and where they are from. One man whose profile lists him as being from Brooklyn immediately replied, “NO CORNFLAKES!!!” (Did you hear that in Bernie Sanders’ voice? Because I did.) Another New Yorker said she’d never seen cornflakes on kugel in her entire life. More folks from New York, New Jersey, and Philadelphia chimed in to agree.

But! Then! A “Houston girl” commented that not only did her family use cornflakes, but they mixed them “with butter and brown sugar to give the sweet kugel a semi-crunchy top to a gooey inside.” (Ah, Texas.) Someone from Boston said she used cornflakes or Ritz crackers for that streusel-like topping.

Still, fellow Chicagoans and people from Michigan, Pennsylvania, Massachusetts, and even someone from the U.K. responded that this is their kugel of choice. But I got many more responses along the lines of “gross!” and “WTF!” and “I would’ve responded earlier but I was too busy vomiting.”

After threatening to hand-deliver a tray of cornflake kugel to all my doubters, I decided what I really needed to do was write this plea to the world at large. Because I’m not angry that people find my favorite family recipe disgusting. I just feel really, really sorry for them. They’ve never gotten the joy of that first crispy-creamy bite, they’ve never known noodle kugel for all it can truly be, and they apparently never learned not to knock something until you’ve tried it.

So, I implore you, the next time you’re making sweet noodle kugel, crumble some cornflakes on top. I promise you won’t be disappointed.

And to the few people who told me they top their kugel with Frosted Flakes? Get outta here. That’s just wrong. 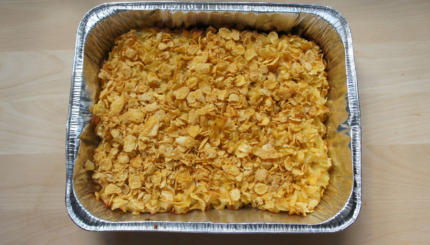 The ultimate comforting side dish. 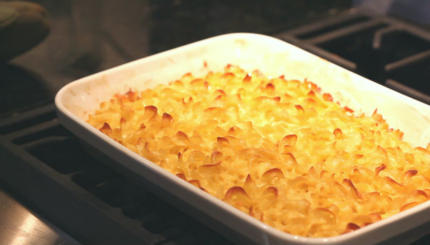