I recently told my parents that they cursed me. The way I see it, when my (probable) Irish genes collided with my (definite) Eastern European genes, I was pre-destined to have a love affair with the potato.

My parents blush and look a little embarrassed when you ask them what my first un-coached word was. Not because it was uncouth, or racy, but because my first un-coached utterance was spoken as we drove past a Burger King. Ladies and gentleman, my first word was “fry”– as in french fry.

Now, my family isn’t really into fried foods. If we have a craving for french fries or onion rings, we go out to our favorite fast food joint or restaurant. We don’t ever fry anything at home; we leave it to the professionals. But, when I was growing up, come Hanukkah we’d open all the windows (a feat in the sometimes sub-zero Ohio winters), close the doors to the bedrooms, and my dad would spend several nights frying up latke after latke.

I love my dad’s latkes. As a child (and, maybe even as an adult) I would gobble them down, often leaving my mom’s brisket (also incredible) untouched. Eventually, we just started having latke-only dinners a few times each Hanukkah.

Everyone has “the perfect” latke recipe, so I won’t attempt to prove my family’s recipe is better than yours. I will, however, share a few of our latke tips with you”

– Do not peel your potatoes
– Salt the potatoes after grating them, let them sit for about 20
mintues, then squeeze as much of the water out as possible
– Grate your onions (juice and all) directly into your squeezed-out potatoes
– Use only a little matzo meal to bind the batter, don’t let the matzo
meal overcome the potatoey-ness
– Fry the latkes in corn oil
– After you fry, pat off excess oil with paper towels
– To keep warm and crispy, place latkes on cookie racks in a 250 degree oven

Rachel Korycan lives in Washington, D.C. and is a Development Coordinator at The Jewish Federation of Greater Washington.

Want some additional tricks for making latkes? Check out this video that purports to give you foolproof latke tips. 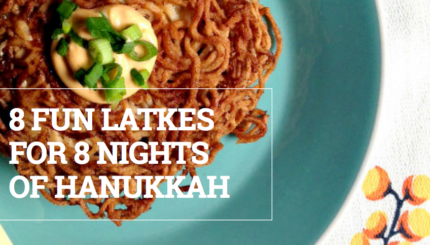 If you are looking for menu inspiration for your eight crazy nights of latkes, our recipe ebook is everything you need. It’s ... 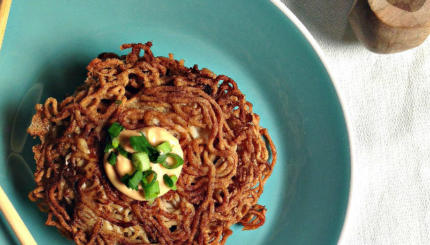 The perfect way to use leftover noodles.