Where to Find the Best Jewish Food in London

You may only know him as the former host of Man v. Food, wincing as he slurped down 180 oysters or a 190-pound burger, but Travel Channel star Adam Richman has been keeping busy since he gave up competitive eating in 2012. He’s written two cookbooks, hosted a bunch more shows, and, most recently, visited the Western Wall in Jerusalem.

This week marked his first visit to Israel and, like a good Jewish boy, he went with his mom. He’s been posting about his trip on Twitter, documenting Tzfat and Jerusalem’s machaneh yehuda market, AKA the classic Birthright itinerary minus hooking up with a hot soldier who turns out to be a total sleaze. However, Monday saw his first Instagram post.

Decked in tefillin (phylacteries) and a snazzy tallis (prayer shawl) with his eyes closed in prayer, the Brooklyn native paired his pic with a seriously long, candid caption.

He started out by sharing that he’d been waiting to visit the Western Wall since 1987, when his grandfather had arranged to take the family to Jerusalem for his bar mitzvah. However, a terror attack a couple of months before they were due to fly “scrapped the whole idea.” He was, he shared, “unprepared for the scope of emotion” that came with approaching the wall for the first time and “began to weep” as soon as he lay his hand on it.

Who else is weeping at his sweet words? Just me? Cool.

He went on to speak about the significance of visiting so close to Tisha B’Av, a day of mourning and fasting that commemorates the destruction of the two Temples, and the diversity of the crowd, including “people of every shape and color.” He said he “felt connected to the traditions of the past, and to the spirit of the Holy Land.”

He ended with a touching wish: “May all your dreams come true, and may your life be full of everything you wish for yourself.”

At first, I was not sure how I felt about my guide capturing this moment on camera. It was, after all, a private moment. It was also a moment I have been waiting for since 1987. My grandfather had wanted to take my family to Jerusalem to have my Bar Mitzvah at The Western Wall. A terror attack months before scrapped the whole idea. I was unprepared for the scope of emotion.. I kid you not-the moment I laid my palm upon the bricks, I began to weep. Being there, at the western retaining wall of the Temple mount, so close to the observance of the Tisha B’Av holiday, where we commemorate the destruction of the temples, you could feel, even among the other worshipers, that this was a very special time. When I first began to pray, there were people of every shape and color on either side of me I put on my t’fillin – the prayer boxes on my head & arm, as Id done for years in Hebrew school – yet this time it felt different. This time it felt vital, important, ancient, HOLY. I felt connected to the traditions of the past, and to the spirit of the Holy Land-not just for Jews, but for Christians and Muslims as well. I took one of the prayer books they had there, and prayed passionately and fervently. I did, as many worshipers do, press my face against the bricks, feeling the warmth of the stone in the afternoon Jerusalem sun, and began to whisper my own prayer directly into the wall. Praying not just for myself, but for my family – and all of you guys as well. Giving thanks for the health & success I have, and for all those who support & believe in me. I then put the note that I had written with my prayer upon it, into one of the many cracks in the wall like thousands of people before me. I can only say I walked away from that wall feeling very different then the man who had walked up to it barely an hour before. So ultimately, I am grateful that this moment was captured. And I am ever thankful for all of you for joining me on my journeys, supporting them, and finding inspiration within them to embark upon journeys of your own. May all your dreams come true, and may your life be full of everything you wish for yourself. ‎!עם ישראל חי

Did his outpouring of emotion make me squirm a little? Of course it did, I’m British.

Do I now feel bad that the last time I was at the Western Wall, I kvetched for an hour about the heat? Sure.

Did he encourage me to write a strong and unapologetically Jew-y Instagram post when I visit Israel later this year? Never say never. 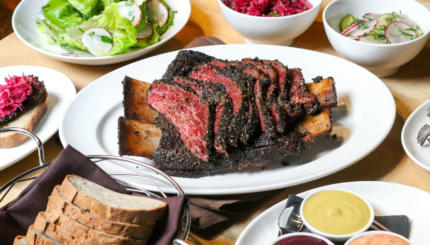 His food is deeply rooted in tradition, with some delicious, more modern dishes. 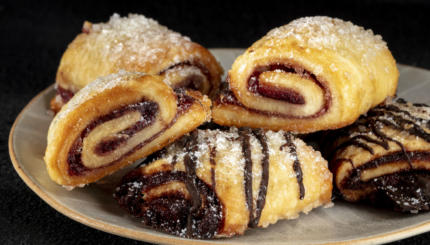