Big news in the Jewish food world! Ben and Jerry’s is finally making non-dairy ice cream. They announced four wonderfully rich and indulgent flavors today. If you thought that news couldn’t get sweeter, they also announced via Twitter that this new line will be marked Kosher-DE (manufactured with Dairy Equipment).

This means great things if you’re keeping kosher and have always dreamed of having a scoop or two of Ben and Jerry’s for dessert after a meat meal. Or maybe you’re among the 75% of Ashkenazi Jews who are lactose intolerant? Regardless, this is clearly a moment for vegans, the kosher community, and the lactose-intolerant to celebrate!

According to their website, the ice cream experts at Ben & Jerry’s spent months developing an indulgently creamy, non-dairy base to fulfill the craving of vegans and those “who would rather not eat dairy.” Need proof? Everything from their almond milk base to their fudgy chunks and caramel swirls are certified Vegan by Vegan Action.

You might be familiar with some of their vegan flavors; there’s Chunky Monkey for the banana-chocolate lovers, and Chocolate Fudge Brownie made with vegan brownies from New York’s Greyson Bakery (which you can feel doubly good about because they provide jobs and training to low-income people).

Aside from these classics, they’re also releasing two brand new flavors–Coffee Caramel Fudge with a base of Fair-trade coffee goodness, studded with deceptively vegan fudge and a rich swirl of caramel, and P.B. & Cookies to satisfy your peanut-butter and oreo cravings with every bite.

These non-dairy flavors are expected to hit the shelves in mid to late-February, just in time to save you from the winter blues. 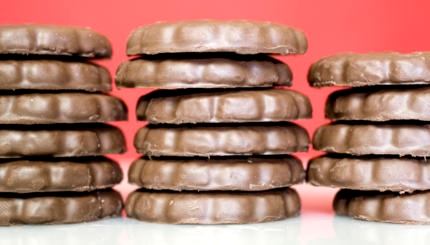 Now here’s some exciting news: The Girl Scouts have been working hard at making sure their cookies can be enjoyed ... 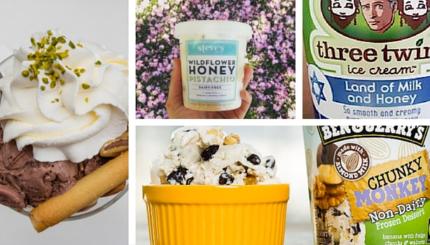 When we covered the artisanal Brooklyn mashup of babka ice cream, we started wondering…who else is making ice cream with ...