Why Montreal Jewish Delis are Obsessed With This Soda

Celery juice may be the all the rage right now as the detox drink of choice, (according to the Kardashians, at least), but Jews were imbibing their vegetables long before this modern-day craze.

Dr. Brown, who lived in the Lower East Side or Williamsburg depending on whom you ask, began in the late 1860s making his own homemade celery “tonic,” which was sold in local delicatessens. In 1886, Dr. Brown’s tonic assumed bottled form, thus achieving a higher level of quality control regarding its carbonation and improving its mass appeal. However, the nascent Food and Drug Administration was not a fan of the “tonic” label, which misleadingly implied the drink’s medicinal utility, and insisted on a name change. The concoction was reborn, “Dr. Brown’s Cel-Ray Soda.”

Believe it or not, bubbly botanical beverages were actually a thing around the turn of the century.  If pumpkin spice was the official flavor of the 2000s, the 1930s analogue was celery. As agricultural production of this vegetable expanded rapidly across the United States due to the recent availability of seeding plants, celery, like today’s spiced squash, trended heavily as a theme ingredient. Several companies, including Coca-Cola and Lake’s of Mississippi also made celery sodas, but their popularity was ephemeral and by the 1930s they had been discontinued.

Only Dr. Brown’s Cel-Ray had staying power, and developed a loyal following among Jews along the East Coast, earning a permanent spot on delicatessen menus and its nickname, “Jewish Champagne.”

Why were Jewish diners so enamored with Cel-Ray? One reason is the strong historical and cultural associations between celery, soda, and the Jewish community. Celery features prominently in traditional Eastern European Jewish cookery, and, as culinary historian David Sax shares in Save The Deli, many immigrants from Poland and Ukraine sought employment in the soda industry due to their experience working with beet sugar processing in their native countries. Celery soda became inextricably tied to the deli scene, Sax further argues, because its refreshing effervescence wonderfully complements rich, salty dishes like pastrami and brisket.

For many die-hard fans, devotion to the drink was forged in youth, and quaffing Cel-Ray in adulthood gives rise to pleasant Proustian nostalgia. Novelist Bernard Cooper describes how he envisioned Dr. Brown as a “kindly, white-coated man not unlike my dentist” and fondly recounts drinking Cel-Ray as a child while eating with his parents at Canter’s Delicatessen. “When I took a swig of Cel-Ray Tonic,” Cooper waxes poetically, “I never thought about anything as mundane as a stalk of celery — instead, I saw cells dividing and recombining, ray guns shooting beams of light. Every gulp was a toast to the future, each bottle a triumph of science.”

Cel-Ray has been further memorialized in pop culture. In Seinfeld’s “The Pothole” episode, Jerry tells the woman he is dating that he can’t kiss her because “I bruised my lip; I was drinking a Cel-Ray and I brought it up too fast.” Molecule Man, father of Sammy Clay in Michael Chabon’s The Amazing Adventures of Kavalier & Clay claims Cel-Ray to be his favorite beverage, which readers may muse is perhaps in part how he came to be nicknamed “The World’s Strongest Jew.” Cel-Ray even has a cameo in the gritty drama 1973 Serpico, as Al Pacino’s character is observed drinking it.

Although the tragic decrease in the number of delicatessens across the United States has led to diminished access to Cel-Ray, a handful of other restaurants and bars have begun serving the soda either straight-up or as a mixer. If you’re hunkering down at home for the holidays, you can have Cel-Ray delivered to your door, and mix your own Jewish champagne cocktail. 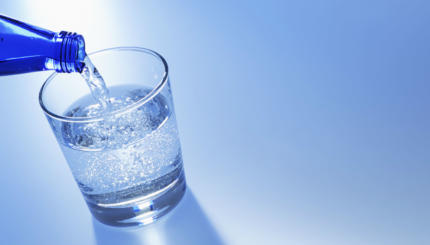 The history of Jewish adoration for fizzy water. 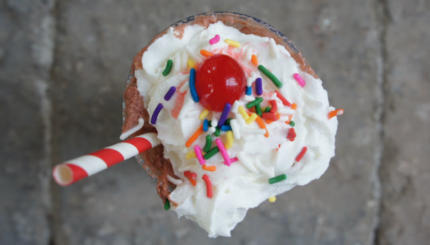 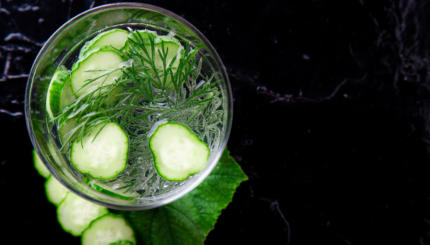