A Unicorn Challah Straight Out of Your Fantasies

Challah is the much-beloved, Shabbat braided loaf made with traditional bread ingredients like flour, water, salt, and yeast, but often with the addition of oil, sugar, and eggs. It’s heavier than other breads, softer, sweeter, and egg-ier, too. Except when it’s not. There is another tradition of a lighter challah, made without eggs called “water challah.” And of course, there is vegan challah, made without eggs or honey.

Traditionally, bakers not only add eggs to the dough, but use an egg wash over the challah before sticking it in the oven to give it that golden, shiny looking crust. But if you are choosing not to use eggs, or you simply have run out, what else can you use as egg wash to achieve that shiny, rich-colored exterior?

I recently set out to research and tested out six different ways to glaze challah (including a typical egg wash) and was intrigued and excited by the results. (I wasn’t too sad about having six loafs of challah around, either.) Here’s what I discovered.

Aquafaba is actually chickpea water, or chickpea brine, and has many baking and cooking applications including meringues, marshmallows, and even mayo. It also yielded the best replacement for the egg wash. The color was rich and golden brown, and it had the nicest sheen out of any of the replacements that I tested. It’s also cheap and readily available if you have some chickpeas in your pantry.

It should be noted that I combined around 2 Tbsp honey with 2 tsp water to thin out the honey a little. The honey imparted only a slight sweetness and gave the next best golden color. However, if your goal is to make vegan-friendly challah, this one’s not for you.

I was surprised how much I loved the maple flavor of this option. Maple syrup is not as thick as honey or date honey, so I did not add any water. However, the color was not nearly as golden or shiny as the aquafaba and it was a bit sticky to the touch.

Israeli pastry chef Lior Mashiach suggested using silan, or date honey, as an alternative to egg wash. It is thick, like actual honey, and so I used the same ratio: 2 Tbsp silan + 2 tsp water to thin it out. The flavor was subtle, but the color was comparable to the maple syrup, not terribly dark.

And for comparison, I left one challah completely naked, using no egg wash at all. Still delicious, but of course no color or shiny hue. But in a pinch, the lack of egg wash really didn’t bother me, and I know for some people they actually prefer their challah sans glaze. 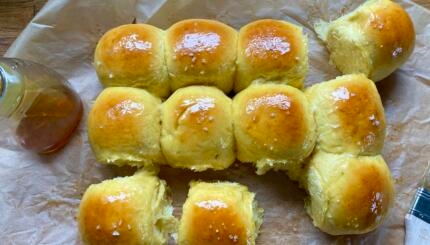 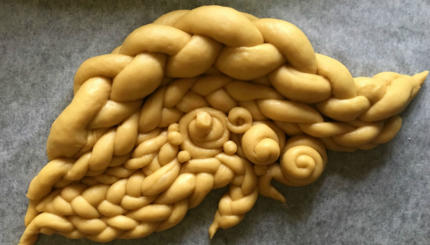 Challah is the one bread that you enjoy looking at almost as much as you enjoy eating. This classic eggy, ...