Jelly donuts are one of the most symbolic dishes of Hanukkah, but have you ever wondered how that came to be? Of all the delicious fried foods to nosh on — fried pancakes, fried chicken, fried cheese, schnitzel–how did the jelly donut, or sufganiyah (sufganiyot is the plural), rise to popularity? The answer, like all good food questions, has everything to do with agriculture, food politics, and of course, our tastebuds.

Oily foods have been made to symbolize the miracle of Hanukkah since the first celebration, but it wasn’t until the Middle Ages that jelly donuts became tied to Hanukkah.

Food historian Gil Marks wrote that the first recipe for the jelly donut was found in 1485, in a cookbook printed in Nuremberg, Germany, called the Kuchenmeisterei (Mastery of the Kitchen) — one of the first to be printed on Johannes Gutenberg’s printing press. The original donut recipe didn’t have a hole, but rather was a pillowy pocket of dough, filled with jam. The recipe instructed bakers to make a jam “sandwich” with two circular pieces of dough, to be fried in lard.

The addition of jam was revolutionary, as donuts had been usually a savory dish, filled with mushrooms, cheese or meat. Regardless of the filling, donuts were expensive treats to make, and not widely consumed. Other fried foods, like buckwheat pancakes, fried radish cakes, and fried cheese curds, were the Hanukkah dishes of choice.

Then, in the 1500s, two important jelly donut events occurred: the cost of sugar went down with the proliferation of slave-produced sugar in the Caribbean, and the Kuchenmeisterei was translated into Polish. By 1600, jelly donuts, called paczki, were beloved throught Poland on Christmas, Hanukkah and other special occasions. In Yiddish, they were called ponchiks, and fried in schmaltz, goose fat, or oil. Interestingly, unfilled donuts, in Yiddish, were simply ‘donats.’

Throughout the 19th and 20th centuries, the tradition of jelly donuts traveled with Polish Jews wherever they immigrated. According to Marks:

In Israel…ponchiks soon took the name sufganiyah (sufganiyot plural), from a “spongy dough”mentioned in the Talmud, sofgan and sfogga. The word sphog, meaning “sponge,” is so ancient that there is a question as to whether it was initially of Semitic or Indo-European origin.

Sufganiyot became specifically tied to Hanukkah in Israel, in the 1920s, when the Israeli Labor Federation declared them the official food of Hanukkah. What do jelly donuts have to do with labor, you ask? While latkes are easy to make at home, sufganiyot provided Israelis with jobs — think of all the baking, transporting, and merchandising behind every box of donuts! 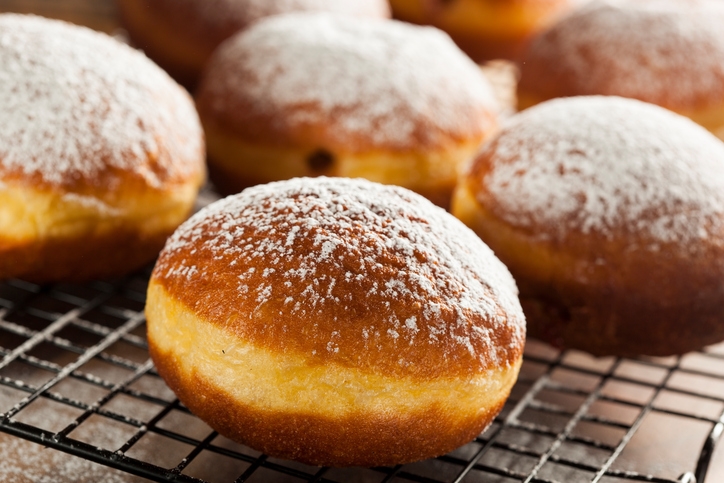 To this day, sufganiyot are hugely visible in Israel in the weeks leading up to Hanukkah, and they’re stuffed not only with jelly, but with cream, halvah, or chocolate ganache.

Here, Americans have embraced the Israeli tradition of eating sufganiyot during Hanukkah, indulging in a variety of fried and filled confections. Here are some of our favorite sufganiyot recipes that we can’t wait to try in the coming weeks:

How to Make the Perfect Sufganiyot 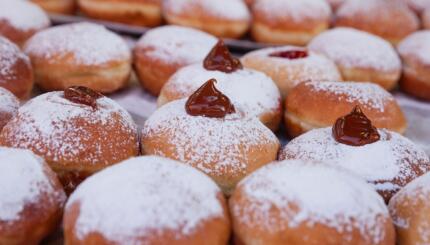 The History of Hanukkah Donuts

From Sephardic bimuelos to the American Jews behind Dunkin' Donuts. 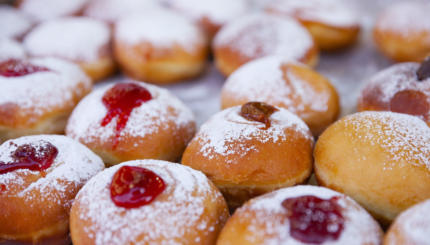 Not everyone is a fan of jelly-filled sufganiyot for Hanukkah. 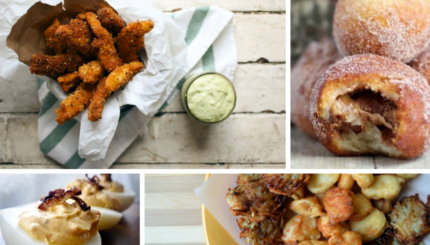 This year, the last night of Hanukkah falls on New Year’s Eve, making for a doubly festive evening. By this ...