It’s no secret that we’re Trader Joe’s superfans here at the Nosher. The quirky American supermarket can brighten even the darkest of days with their products and friendly staff.

If you’ve been living under a culinary rock and haven’t heard of this Middle Eastern spice blend, allow us to introduce you. Za’atar varies from region to region, but most blends include thyme, oregano, sesame seeds, salt, and sumac — a dried, ground berry with a deep red color and lemony kick.

FYI, somewhat confusingly, za’atar is also the name of an oregano variety called hyssop that’s native to the Middle East and Southern Europe. Most blends no longer incorporate the plant because it’s a protected species.

Trader Joe’s za’atar blend mostly sticks to the script, combining toasted sesame seeds with thyme, marjoram, and salt — as well as a few unusual additions like ground coriander, lemon oil, and chickpea flour. We’re a little sad that it skimps on the traditional zingy sumac, but the lemon oil brings a similar flavor.

The container states that it holds 106 servings — that’s one hundred and six opportunities for savory, herby, tangy joy with just the flip of a lid and a shake of a hand.

Honestly, za’atar is so versatile that 106 seems a modest number.

You could go the Israeli route and sprinkle it on olive oil-drizzled pita, mix it into labneh (a strained cheese also available at TJ’s), or serve  it alongside Jerusalem bagels — all great options.

You could try some of our recipes, like za’atar fried chicken or savory za’atar challah — both are fabulous.

Or you could sit back and wait for Trader Joe’s to roll out an abundance of za’atar-flavored products. We predict they’ll be za’atar popcorn, za’atar hummus, and za’atar nuts before the year’s out.

Can’t get enough of our favorite supermarket? Check out our list of Jewish and Israeli food at Trader Joe’s. 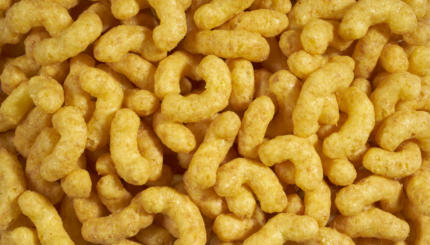 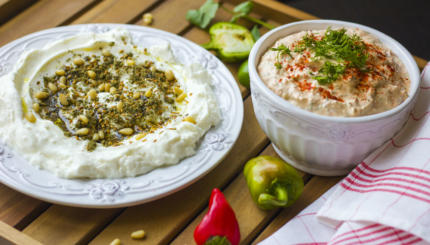 23 Recipes That Use Za’atar

The Israeli spice you need to know. 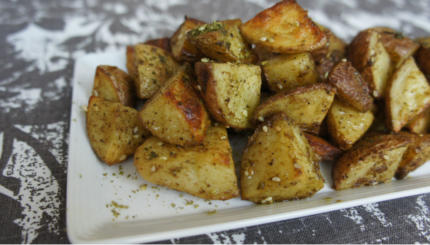 Everyone loves roasted potatoes for Shabbat dinner or even a weeknight meal. Its cheap, pretty effortless and potatoes are a ...