17 Chinese Takeout Recipes to Make at Home for Jewish Christmas

Like many Jews, my family spends Christmas Eve eating Chinese food. We order far more than we’ll ever be able to eat, knowing we’ll feast on the leftovers for days to come: potstickers, chow mein, moo shu chicken, eggplant with garlic, and at least two orders of our favorite: golden-brown, green-studded scallion pancakes with a spicy, savory dipping sauce.

But this year, Hanukkah starts on Christmas Eve, and so instead of Chinese food, we’ll be frying up latkes and jelly doughnuts–also known as sufganiyot. And while we are all beyond excited for delicious Hanukkah foods, a December 24th without scallion pancakes just felt wrong to us.

Fortunately, the solution to this problem is an easy one: Since we’ll already be frying, scallion pancakes fit in perfectly with our Hanukkah feast (they are, after all, kind of the latkes of the Far East). This Hanukkah we’ll be celebrating two miracles: the oil in the temple lasting eight nights, and perfectly crisp, flaky (thanks to boiling water in the dough, toasted sesame oil, and the creation of multiple layers via a special rolling flattening process) scallion pancakes in the comfort of our home.

Note: Though the pancakes are best served hot out of the pan, they may be kept warm in a 200° oven for up to 30 minutes. 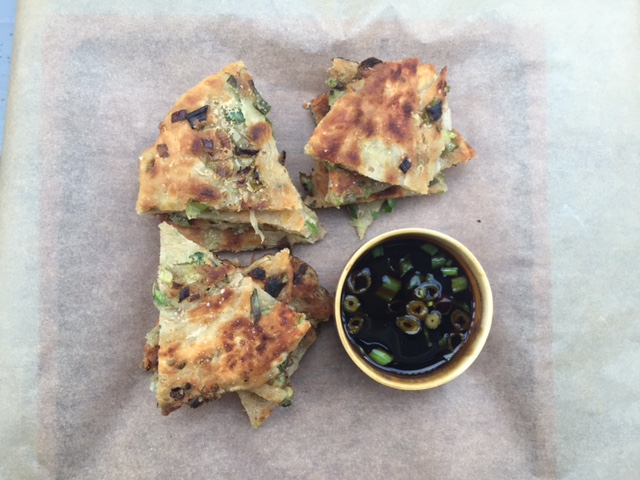 2/3 cup boiling water (plus a little more if necessary)

1/4 cup vegetable, canola or grapeseed oil, plus more as needed

For the Dipping Sauce

Place the flour in the bowl of a food processor (or in a regular mixing bowl).

With the food processor running, stream in the water a little at a time, just until a dough forms (depending on many factors such as your flour or the temperature of your kitchen, you may find that you don’t need all the water, or, alternately, you may find that you need slightly more). If you are using a regular bowl instead of a food processor, use a wooden spoon to quickly stir in the hot water just until a dough forms.

Run the food processor for an additional 20 seconds to lightly knead the dough. If you are working by hand, knead the dough on a lightly floured surface for 2-3 minutes, until it is smooth and elastic.

Pull the dough into a smooth ball, and transfer to a lightly oiled bowl. Roll the ball of dough around in the bowl to oil it on all sides.

Cover the bowl tightly with plastic wrap or a damp towel.

Let the covered dough rest at room temperature for at least 30 minutes (up to 2 hours).

While the dough rests, make the dipping sauce by whisking together all ingredients. Let sit at room temperature until you are ready to serve the pancakes.

Once the dough has rested, transfer it to a lightly floured surface and divide it into 4 equal pieces.

Use a floured rolling pin to roll out one piece of dough into a 6 ½ -inch circle.

Brush the top of the dough circle with one tablespoon of toasted sesame oil and sprinkle with 1/8 cup of the sliced scallions. 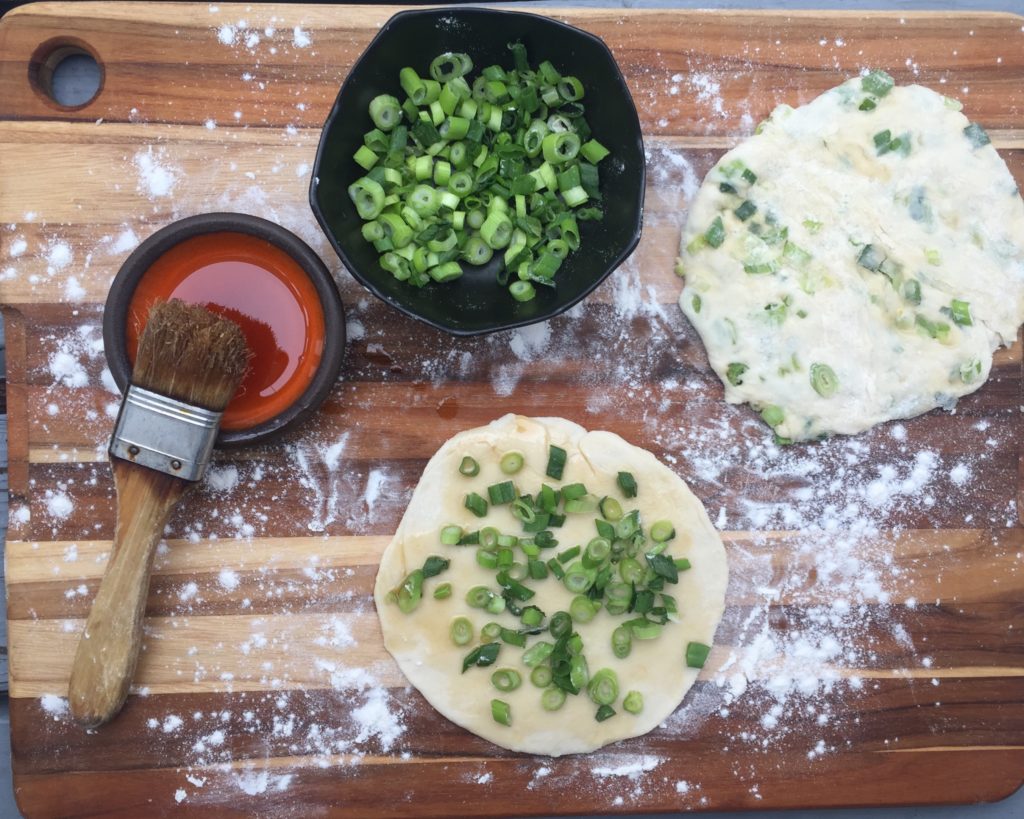 Roll the dough up into a cylinder, as if you are making cinnamon rolls, from one end to the other, keeping the sesame oil and scallions on the inside. Coil the cylinder, so that it forms a smaller, fatter circle.

Use the rolling pin to gently flatten the coil into a 6 ½ -inch circle.

Repeat the above process (brush with more sesame oil and another 1/8 cup of scallions, roll into cylinder, coil, and flatten) with the same circle of dough, and set it on a lightly floured surface while you work on the remaining pancakes.

Repeat with the remaining dough pieces, until you have 4 uncooked pancakes.

Heat the oil in an 8-inch cast iron or nonstick frying pan over medium-high heat. Place a rimmed baking sheet lined with paper towels next to the stove.

Cook the pancakes one at a time, for 1 ½ to 2 minutes on each side, until golden-brown and crisp. Add more oil to the pan if necessary.

Transfer the cooked pancakes to the paper towels. Sprinkle the tops very lightly with salt (the dipping sauce is plenty salty, so you won’t need much).

Cut the pancakes into wedges and serve with the dipping sauce. 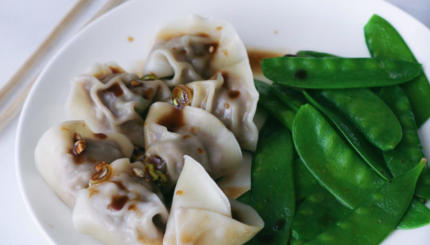 What do you do when the craving for Chinese food hits? I usually give in and order takeout from a ...

Love challah? Love Chinese food? You can’t believe the luck you’re in: Challah with a Chinese Twist! Hold onto your ...

Christmas is here, and Chinese restaurants are preparing for the Jews to take over. This week I’ve put together some ...