The Best Bagels in Unexpected Places Around the World

Until relatively recently, finding a good bagel in Europe was not particularly easy, and bagels were largely absent from German menus. In fact, Jewish food in Berlin and Germany at large has a bit of a complex history. Within recent memory, it was illegal for Jews to own a restaurant or a business of any kind in the lead up to the Holocaust. Prior to that chapter of history, German-Jews were greatly influenced by their Gentile neighbors. Gefilte fish migrated from Catholic to Jewish diets in the Middle Ages and the German Hefezopf is a braided bread said to be the precursor to the challah we all know today. There’s even a theory that German Jews originally brought the bagel to Poland as far back as the 14th century.

Of course the combination of bagels, lox, tomato and red onion all sandwiched together is a uniquely Jewish-American invention, so in some ways it isn’t surprising that it’s only in recent years that bagels have crept onto the culinary scene in various European cities. But one additional factor adding to this bagel craze is the increase of Ashkenazi-Jewish-American immigrants to Berlin who, of course, can’t go without their beloved bagels. According to some estimates, there are over 20,000 Americans living in Berlin, so with the increased American expat demand for bagels, as well as the way bagels have gained popularity globally, it has been the perfect combination to inspire these high-quality bagel shops.

Here are three Berlin eateries producing bagels any New Yorker would be happy to nosh.

Cynthia Barcomi first opened her shop on Bergmannstraße in 1994. It started off as a coffee roastery but Barcomi quickly felt the urge to bake bagels.

“Strangely, in 1994, nobody knew what a bagel was,” she says. “I really had to explain to people what they were.”

Fortunately for Barcomi, her German customers took to bagels quickly. They also struck a chord with Germans who’d traveled to the States and never expected to find an authentic New York-style bagel in Berlin. “They’re not part of German food culture, per se,” adds Barcomi. “So I think they’re interesting for Germans because they’re kind of exotic.”

That said, things didn’t go as well when Barcomi tried to add bialys to the menu, arguably a cousin to the bagel. “Nobody knew what a bialy was,” she says. “I swear to you, I couldn’t give them away.” And so Barcomi decided to focus her efforts on making high-quality bagels. She’s even dabbled with controversial takes on the bagel, like cinnamon raisin bagels. But she does have her limits, including blueberry bagels which she promises they will not make. Bialys and blueberry bagels aside, the menu features a mix of bagels, German breakfast favorites like crunchy müsli and muffins as well as salads, sandwiches and slices of cake for lunch.

Jewish-American Laurel Kratochvila’s Fine Bagels is considered by many to be the go-to spot for bagels on Berlin’s East Side. Lines regularly stretch down the block, full of Berliners –– new and native-born alike –– eager to get their hands on one of Laurel’s hand-rolled and boiled bagels. Kratochvila got into the bagel business for the same reason as Cynthia Barcomi –– she couldn’t find good bagels in Berlin. “What Berliners are doing to the bagel is bad for the Jews,” she has previously told Tablet Magazine.

As time went on, she became more earnest about sharing Ashkenazi Jewish cuisine and Yiddish culture. The Yiddishism “Lign in d’rerd un bakn beygl” is printed in black all caps letters above the drinks menu and there is no shortage of Jewish cookbooks to be found on the shelves. She did, however, resist the suggestion early on to call Fine Bagels “Authentic Jewish Baking.” For Laurel, it’s all about the craftsmanship combined with traditional Yiddish baking.

She wants her bagels to speak for themselves, and you can order just about anything on a bagel there: Cream cheese and lox, avocado with tomato, mint, arugula, or homemade hummus with olives. They also carry an array of Jewish baked goods you would expect of a heimishe bagel shop including babka, rugelach and challah on the weekends.

The most recent addition to Berlin’s bagel scene is Masha’s Bagels & Delicatessen tucked inside a residential corner of the city’s Alt-Treptow neighborhood. Masha’s opened at the end of July 2021, wanting to fulfill a niche for authentic bagel shops and Jewish delis.

“It struck me as a good business idea given the high percentage of expats living in Berlin,” says founder Alex Frons. “As well as the general fondness Germans have for cream cheese, smoked salmon, and all things bread.”

Frons sees Masha’s as both a neighborhood hangout and a way to bring traditional New York Jewish deli fare to Berlin. They want the food to feel authentic and to be embraced by the neighborhood and locals they’re serving. In addition to hand-rolled bagels and smoked fish, they are serving up deli classics like Reuben sandwiches and matzah ball soup.

“We’re taking a traditional approach to our bagels and trying to keep the menu similar to something you might find in a NYC bagel shop or deli,” she says. Much of the inspiration –– ånd future aspirations –– for Masha’s menu comes from Frons’ family history. “My business partner and I are both originally from New York and the shop is named for my grandmother, whose early nickname was Masha,” she says. “She was born and raised in New York to Eastern European Jewish immigrants.”

Hungry for more Berlin content? Check our our complete guide on where to eat the best Jewish food in Berlin. 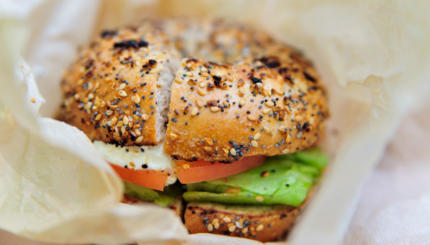 The Best Bagels in America, According to Nosher Readers

Because we know you love your bagels. 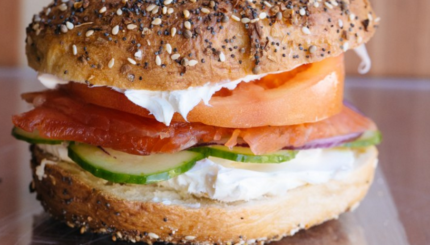