How to Make Schnitzel in an Air Fryer

Fried food is great — crunchy, satisfyingly oily, totally indulgent. But there’s a reason it’s usually reserved for special occasions — the sluggish aftermath isn’t conducive to anything but a long nap. Don’t be downhearted, though, because there’s a handy gadget the on the market that yields the same results as a deep fat fryer, only with way less oil, none of that post-binge fatigue, and easier cleanup: the air fryer.

We’ve rounded up our favorite air-fried versions of Jewish comfort foods to enjoy: 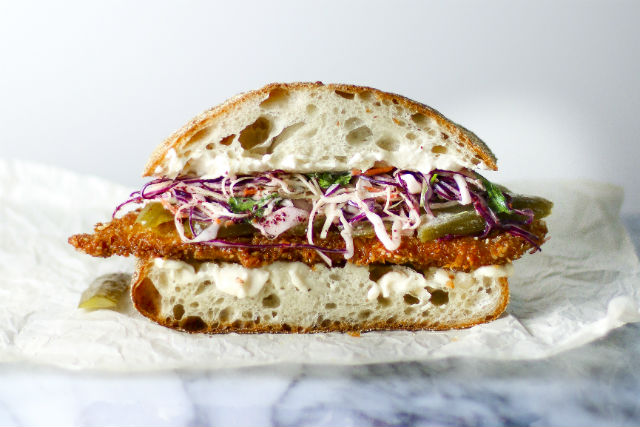 Few things beat a really good schnitzel. The air fryer ensures that the inside stays juicy and the outside is crisp — with none of the grease. Heaven.

The only thing better than a fat pickle plucked straight from a vendor’s tub on New York’s Lower East Side is a fried pickle. Scratch that, an air fried pickle. Crunchy with seasoned panko bread crumbs, this is the perfect guilt-free snack.

Let’s be frank: even deep-fried homemade falafel often sucks. Not this recipe. It doesn’t cut any corners, calling for dried chickpeas and lots of parsley and cilantro for a vivid green interior. Absolutely worth the effort.

Chinese food isn’t just for Christmas, and this air-fried General Tso’s chicken recipe is better than any takeout. It keeps all the spice and crunch of the original, but won’t leave you needing a nap.

On that note, sufganiyot are absolutely not just for Hanukkah — who really knows what day it is anymore, anyway?! It’s totally acceptable to sample all three flavors of these air-fried sufganiyot in one sitting.

If you’re already in the holiday spirit, try your hand at air-fried latkes. Requiring only a spritz of oil instead of an entire panful, this recipe is far less messy than the original, but just as tasty.

Did you know that fish and chips was brought to England by Portuguese Jews who fled the Inquisition? Read all about it here. We wonder what they would make of this versatile, super easy air-fried version — we’re big fans. 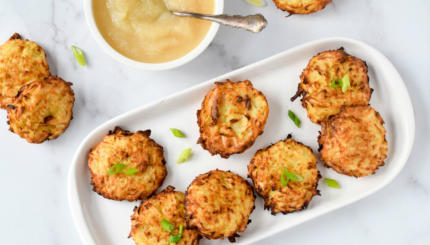 The secret to latkes with crispy outsides, creamy insides, and no grease. 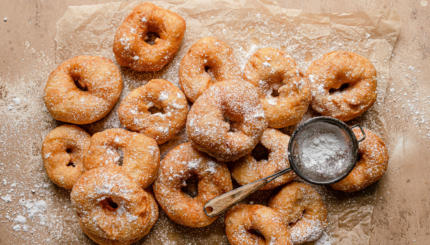 We can't get enough of these fried treats.