In August last year the eldest of our three daughters was married to her long time boyfriend that she met at University. We were very pleased and excited about the prospect of their marriage.

We are a traditional Masorti family and we have brought our children up with a strong commitment to our Jewish values. Of their own volition the engaged couple went to pre-marriage lessons with Dina Brawer.

Our daughter expressed some interest in going to a mikveh before her wedding. I felt uncertain to begin with, as I had not done this myself. I was married in the early 1980s and although we had a United Synagogue wedding ceremony, there was no expectation that I should go to the mikveh beforehand. The Rabbi did spend a long time explaining to us how the mikveh was built but did not express any spiritual benefits of the process of immersing in the mikveh.  It seemed unattractive and irrelevant to our lives at the time.

For our daughter it was different. She gained a lot from Dina Brawer’s classes and was keen that we should go to the mikveh together before her wedding.

I was pleased to take on the mikveh experience. I strongly believe that a family simcha (celebration) should be made as much of as possible so this seemed like another joyous experience that we could have together. I had had the experience of losing my own dear mother just four years after my own marriage and believe strongly that you do not know how life will turn out.

We spoke to Dina about our plan to visit the mikveh and she encouraged me to take full part in this by immersing myself. I considered this and agreed that I would do it as part of the ceremony of marrying a daughter.

So three days before the wedding, Anna and I went to the mikveh in Maida Vale, London. To my surprise the mikveh was set up like a spa and not at all like I had imagined from my wedding classes, over thirty years ago.  Anna and I prepared ourselves in the bathrooms and waited for the mikveh lady to knock on our door so we knew it was our turn.

I went first and despite my unease of putting my head in the water I ducked under three times to the mikveh lady’s satisfaction. I recited a short prayer that Dina had given me. It was one of the most moving and memorable parts of the wedding preparations, as its sentiment is to wish our daughter all happiness in the future life she was embarking on.

Then Anna entered the mikveh and this too was moving to see her in a physical way leaving ‘girlhood’ and moving towards becoming a wife and having a new and important commitment.

I felt the whole ceremony was very moving and inspired a particular closeness between Anna and myself prior to her  wedding. It added to our shared joy and strengthened the bond between us.

Since learning about ritual purity and mikveh from Dina Brawer’s pre-marriage classes, I was excited and intrigued about going to the mikveh before before my wedding. I felt it would represent a physical transition from my unmarried self, to the married woman I was to become. When I learned that my mother had been persuaded by Dina to join too for her first time, I was even more excited. It would be a meaningful shared experience for us both – in that we were both mikveh-novices, and that we would be able to support each other.

The experience itself was how I had hoped. It really was a break off point from the sometimes frenetic wedding planning, giving me a chance to focus on what was really important. I was entering into a Jewish marriage with new mitzvot (commandments) to fulfill and that I was joining a ritual that Jewish women across the world have been part of for centuries.

Through the ritual of the mikveh preparation, ducking under the water and saying the blessings, with my mum watching  – I left feeling closer to her. A sense of calm and spirituality descended over us, and I think we both left feeling more focused on what was to come over the next few days and what it meant. I was leaving my family unit, to make one of my own. Although it felt emotional at the time, looking back it was an important beginning of a very happy celebration.

I have since encouraged other friends to go to the mikveh before their weddings. All have commented on how it made them truly focus on what was important to them over the days and years to come in their future marriages: love, family, and belief. 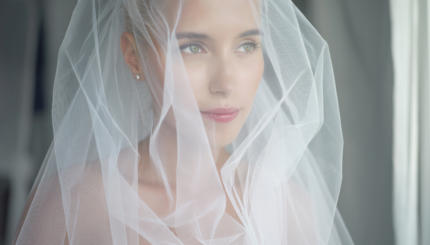 For some couples, the bedeken is a chance to set the mood for their wedding ceremony, often in a personalized way.