The Last Million: How a Million Refugees Became Postwar Pawns of the Allies 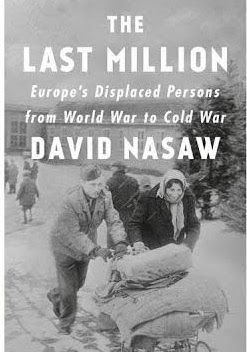 The violence of World War II did not end with the signing of ceasefires, truces, or peace treaties,” writes David Nasaw in his new book – THE LAST MILLION: EUROPE’S DISPLACED PERSONS FROM WORLD WAR TO COLD WAR. Millions of concentration camp survivors, POWs, slave laborers, political prisoners, and Nazi collaborators in flight overwhelmed a ruined Germany. After exhaustive efforts to repatriate the malnourished and desperate refugees, there remained more than a million displaced persons left behind in Germany: Jews, Poles, Ukrainians, and other Eastern Europeans who refused to go home or had no homes to return to. No countries were willing to accept the 200,000–250,000 Jewish people who remained trapped in Germany—including the United States, which severely limited the entry of Jews on suspicions of their being Communists. It took the controversial partition of Palestine and Israel’s declaration of independence to find home for the Jews who remained in displaced persons camps in Germany. Join Orange County CSP as David Nasaw will discuss The Last Million and the until now largely hidden story of postwar displacement and statelessness, a story whose contemporary resonance shows us that it is our history as well.