The JArts series of virtual cultural experiences that bring us together to explore and celebrate the diverse world of Jewish art, culture, and creative expression.

Derek David is a composer, conductor, music educator, and Yiddishist based in Boston, Massachusetts. He is the musical director of A Besere Velt, the chorus of the Boston Workers Circle. Now in his third year, he has presided over numerous concerts including the Yiddish New York festival in 2018, as well as collaborations with celebrated artists in the Yiddish world such Loren Sklamberg, Polina Shepard, and Anthony Russell. A Besere Velt and musical arrangements by David are featured on Sklamberg and Shepard’s new Album 150 voices. Yiddish has played a central role in his life. Having spoken Yiddish with his grandmothers as a young child, Derek has gone on to study Yiddish at The YIVO Institute of Jewish Research, as well as at the Workers Circle. As a Yiddishist, David is deeply devoted to the preservation and continued evolution of Yiddish art in the 21st century.

Learn The Art of Papercutting Online

This one-hour workshop with My Jewish Learning will take place on Monday, June 29, at 7 p.m. EDT 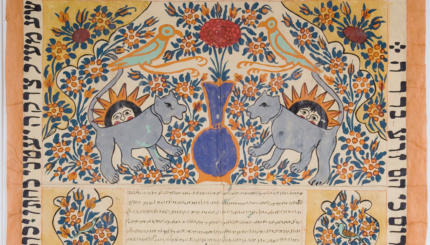