For Abraham Foxman, Yom HaShoah -Holocaust Memorial Day – is neither an abstraction nor a day of mourning for relatives he never met. In 1941, when he was just an infant, his parents were forced into a Vilna ghetto and turned him over to a Polish nurse for safekeeping. Instead, she baptized him a Catholic, taught him to hate Jews and refused to return him when his parents emerged at the end of World War II.

He went on to spend three decades as America’s top cop on the anti-Semitism beat. As National Director of the Anti-Defamation League, he answered every threat, every demeaning remark, every whiff of prejudice by wielding his rhetorical cudgel to call out and catalog the danger. Actors and politicians, entertainers, pundits and religious leaders. No one was immune to Foxman’s biting criticism as he trumpeted the increasingly alarming statistics about the rise of hate crimes and warned of the dangers of politicizing anti-Semitism.

Temple Emanu-El is honored to welcome Mr. Foxman to talk about his life, his life’s work and about keeping Jews and Judaism alive.

Yom HaShoah Book Talk: Remembering the Holocaust Through the Life of Siggi Wilzig

The Challenge of Yom HaShoah

Tonight is Yom HaShoah – Holocaust Memorial Day. Last night I was discussing remembrance with my ninth graders at our ...

Today is Yom HaShoah, a day to remember and honor the lives of all those who were killed in the ... 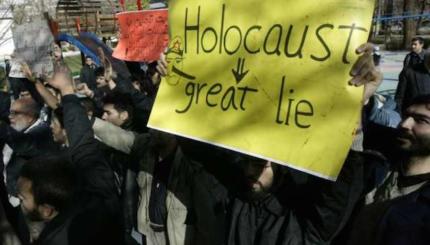 Understanding the arguments of so-called revisionists.